Skip to main content
You are the owner of this article.
Edit Article Add New Article
You have permission to edit this article.
Edit
Welcome, Guest
Home
News
Sports
Obits
Business
Opinion
Multimedia
Living
Classifieds
+ More
Share This
1 of 3 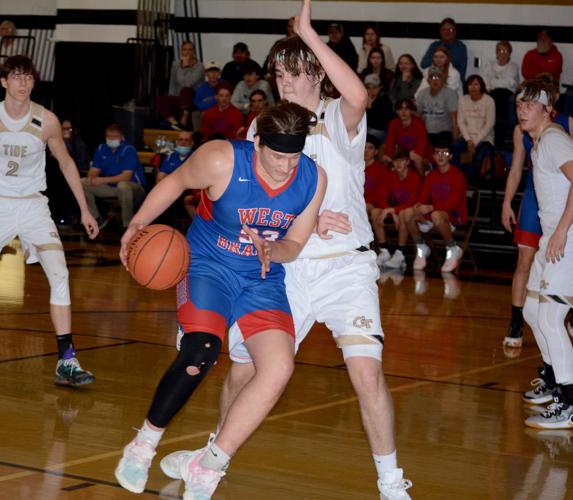 West Branch’s Kyle Kolesar tries to make a move in the paint around Curwensville’s Parker Wood during the second half of Thursday’s game at Patton Hall. Both big men ripped down 10 rebounds in the game, which the Warriors won 57-47. 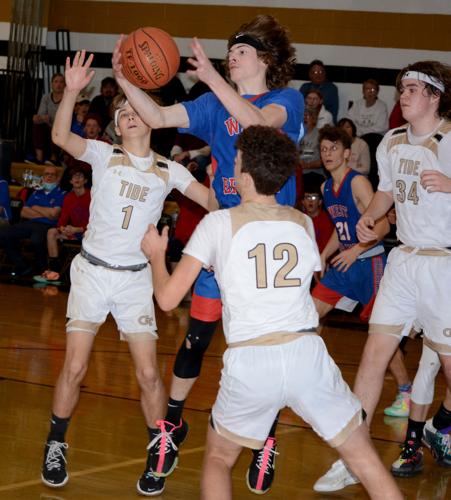 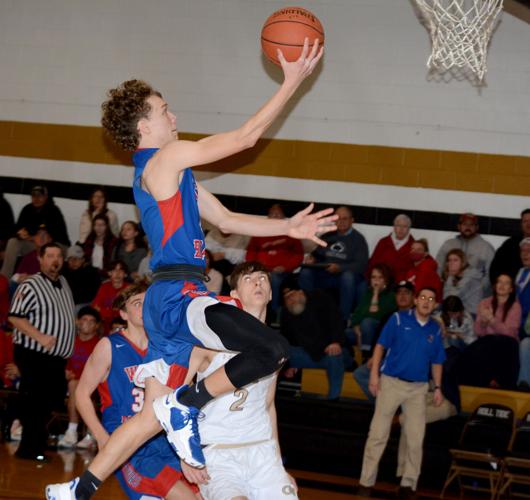 West Branch’s Isaac Tiracorda lays the ball in the net during the fourth quarter of Thursday’s game against Curwensville. Tiracorda had 14 points and six steals in the Warriors’ 57-47 win.

West Branch’s Kyle Kolesar tries to make a move in the paint around Curwensville’s Parker Wood during the second half of Thursday’s game at Patton Hall. Both big men ripped down 10 rebounds in the game, which the Warriors won 57-47.

West Branch’s Isaac Tiracorda lays the ball in the net during the fourth quarter of Thursday’s game against Curwensville. Tiracorda had 14 points and six steals in the Warriors’ 57-47 win.

CURWENSVILLE — After battling Curwensville to a 24-24 tie in about as even a first half as you’ll see, the West Branch boys basketball team made a game-altering run to start the third quarter Thursday at Patton Hall.

The Warriors opened the frame on a 9-2 surge and pretty much kept that cushion the rest of the game, taking as much as a 12-point lead before settling for a 57-47 victory.

“We got them extending out a little bit in their zone and got some different lanes than we had in the first half.”

Four of the five Warrior starters scored a bucket in the run with Jackson Croyle’s 3-pointer, prompting a timeout by Curwesnville assistant coach Eric Duriancik, who was in charge of the Tide in place of head coach Matt Wassil, who was out due to COVID protocols.

“They came out aggressively in the third quarter and executed their stuff and our Achilles Heel the last few weeks has been not doing that,” Duriancik said. “Williamsburg on Monday we were only down four at the half. There have been other games that have been close or we’ve been up and for whatever reason the first few minutes of the third quarter have killed us. We’ve tried to fix it and we’re going to keep trying.”

West Branch took a 37-32 advantage to the fourth quarter and upped the lead to 50-38 with just a few minutes left to play when Isaac Tiracorda stole the ball and took it coast to coast for a layup. Tiracorda had 14 points and six steals for the Warriors.

“What more can I ask from Isaac,” Clark said. “He’s a sophomore and he’s pretty much our go-to.”

The Golden Tide cut their deficit to 50-45, thanks to a 3-pointer and two free throws from Ty Terry and a basket in the paint by Parker Wood. Terry led the Tide with 17 points, while Wood netted 13 and added 10 rebounds.

But Zack Tiracorda ended the Tide 7-0 run with a bucket and the Warriors closed out the game on a 7-2 charge to earn the 10-point win.

“We told the guys that we really couldn’t fault their effort,” Duriancik said. “The biggest things that hurt us were turnovers and giving them second-half opportunities. But give (West Branch) credit, they run a lot of nice sets and they have some nice players that make open shots and attack, and they do their stuff very well.”

“We thought we were going to break it open a little bit when we got it two 12, but they got it right back to five,” Clark said. “It got a little dicey. But the guys got relaxed and executed a couple plays that we called and it all worked out.”

Tiracorda scored seven of his team-high 18 in the final stanza. He also netted seven in the first quarter to help the visitors take a 16-14 lead after one.

“When Zack sees the court a little better and waits ... sometimes he likes to go on the first pass. That ball was swinging around to him a couple times and that lane was open. He got to the line and he got to the rim. That’s the Zack we always need.”

Wood netted nine for Curwensville in the second quarter to lead the Tide into the half with the game deadlocked at 24-24.

Nearly all statistical categories were deadlocked at the half.

Both teams were 9-of-30 from the field. West Branch had one more rebound than the Tide and turned the ball over one more time. Each team also made four free throws.

But that all changed in a short spurt to start the third quarter and led the Warriors to their third win in a row.

“Kyle came ready to play,” Clark said. “I challenged him the last two games. He wasn’t playing the way we know he can. And he did tonight.”

West Branch improved to 5-7 overall, 5-2 in the Inter County Conference and 3-1 in the Moshannon Valley League.

The Tide are back in action today at Brockway.

EXECUTRIX’S NOTICE In re: Estate of CAROLE A. LITTLE, deceased

ADMINISTRATOR’S NOTICE Letters of Administration in the Estate of MILFORD