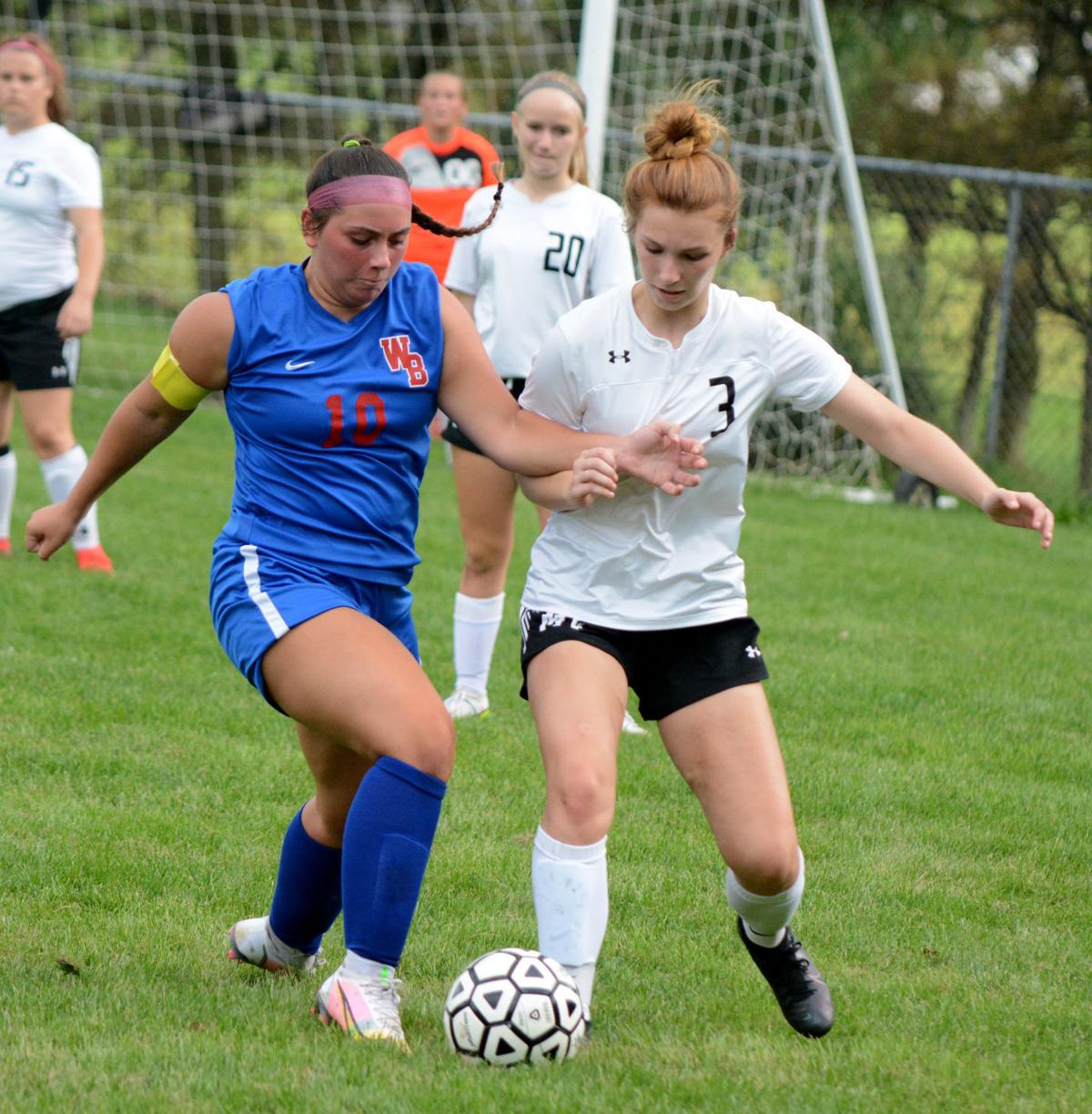 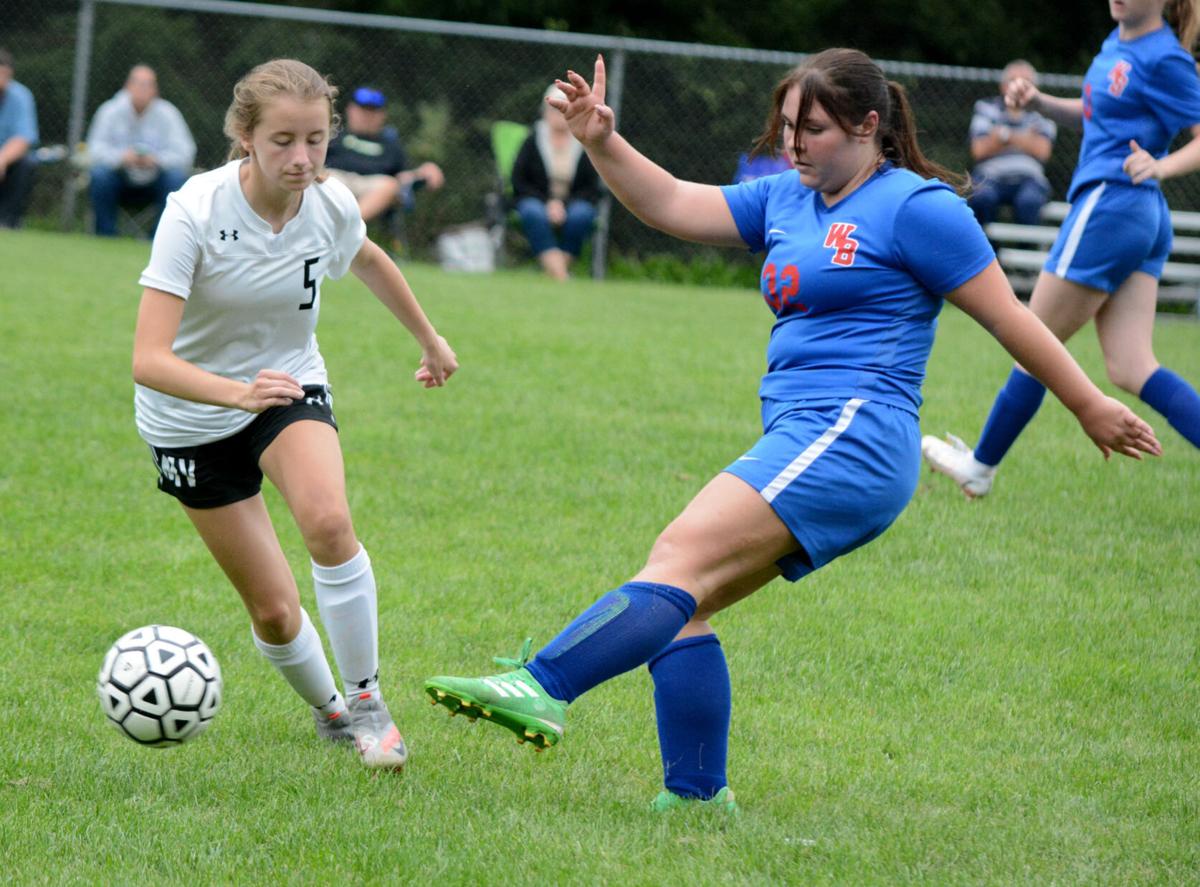 West Branch’s Eleyna Hanslovan boots the ball by Mo Valley’s Janaye Shimmel during the second half of Thursday’s game. The Lady Warriors beat the Damsels 9-0. 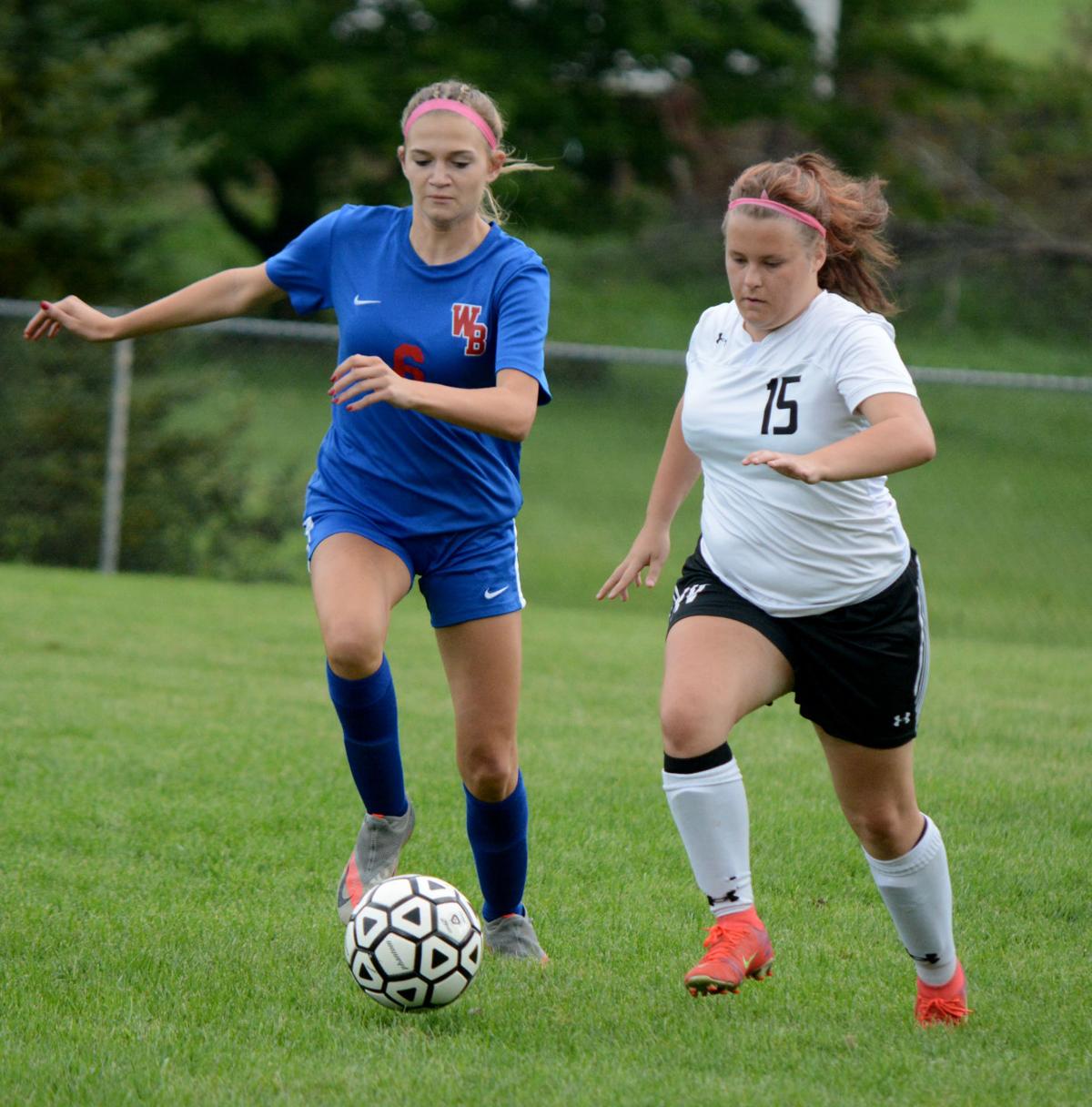 West Branch’s Jenna Mertz runs with Mo Valley’s Mazie Sattler during the first half of Thursday’s game. Mertz recorded an assist in the Lady Warriors’ 9-0 victory.

West Branch’s Eleyna Hanslovan boots the ball by Mo Valley’s Janaye Shimmel during the second half of Thursday’s game. The Lady Warriors beat the Damsels 9-0.

West Branch’s Jenna Mertz runs with Mo Valley’s Mazie Sattler during the first half of Thursday’s game. Mertz recorded an assist in the Lady Warriors’ 9-0 victory.

Six different Lady Warriors found the back of the net, while 13 had at least one shot on goal. West Branch peppered Damsel keeper Kate Fox with 32 shots on the day.

“The teamwork was phenomenal,” West Branch head coach Angie Fenush said. “That’s one thing this team can really pride themselves on is they are unselfish, which makes a really great team. And through that unselfishness, we still have a couple people shine through like Straka’s hustle and her work and her shots. That first shot to the upper 90 was just awesome, and she worked hard for it.”

Straka put the Lady Warriors on the board at 4:33 with a strong shot from the right wing to the upper 90 at the far post.

Parks followed with her first goal just 2:29 later, chipping the ball over the keeper after getting set up by a drop pass from Lauren Timblin.

“We gave up,” Mo Valley head coach Joceny Benjamin said. “We let them do whatever they wanted. They have a good team, and they have good numbers too. And we only had 13 play. But we gave up.”

West Branch possessed the ball in the Damsel half of the field for nearly the entire first half, firing 19 shots at Fox, who made several brilliant saves to keep her team in the game.

“We had a ton of shots on goal,” Fenush said. “(Fox) played her heart out. It was really nice to see her laying out left and right and testing our team to really put it upper 90 or low and hard. She didn’t let any easy ones in.”

“She was so exhausted,” Benjamin said of his keeper. “Without her we would have lost by more.”

West Branch finally solved Fox later in the first half with a flurry of goals.

Straka scored at 19:30, taking advantage of a bad clear by a Damsel defender, and Abby Diviney finished a Jenna Mertz cross at 22:49 to make it 4-0.

Emma Bucha made it 5-0 at 28:38 after another bad clear in the Damsel box, and Olivia Koleno finalized the first half scoring at 30:06, drilling the ball by Fox after taking a short cross pass from Kaylea Fenush.

The Damsels did have a few opportunities in the first half, most off the strong right foot of Sarah McClelland, but Lady Warrior keeper Katlyn Folmar stood tall, stopping all four shots she faced.

“McClelland is probably one of the best soccer players in the area and Katlyn is new in goal and she did a heck of a job to the happiness of her teammates. They tried to protect her back there, but she stood her ground and it was nice to see that zero on the board today.”

The second half went much like the first with the Lady Warriors dominating possession and outshooting the Damsels 13-1.

Straka secured her hat trick at 42:58. Anna Diviney scored at 51:00 and Parks netted her second tally at 60:05 off an Eleyna Hanslovan assist.

“We got the young girls in. A couple of them got their first varsity goals,” Fenush said. “It all came down to unselfish play and really good teamwork.”

It’s back to the drawing board for Mo Valley, which had a big double overtime win over Curwensville on Tuesday before falling flat against West Branch.

“If we would have played half as well as we did Tuesday, this would have been a different game,” Benjamin said. “We need to look deep down and do some searching.

“I see them in practice. We’re not that bad. That was not us out there today. This didn’t even look like a rivalry today. We came out flat. There was no emotion. I don’t think we wanted it today and the other team wanted it more. They were the way better team today.”

Mo Valley slipped to 2-2 with the loss. The Damsels travel to Northern Bedford on Sept. 23.

ESTATE NOTICE NOTICE IS HEREBY GIVEN