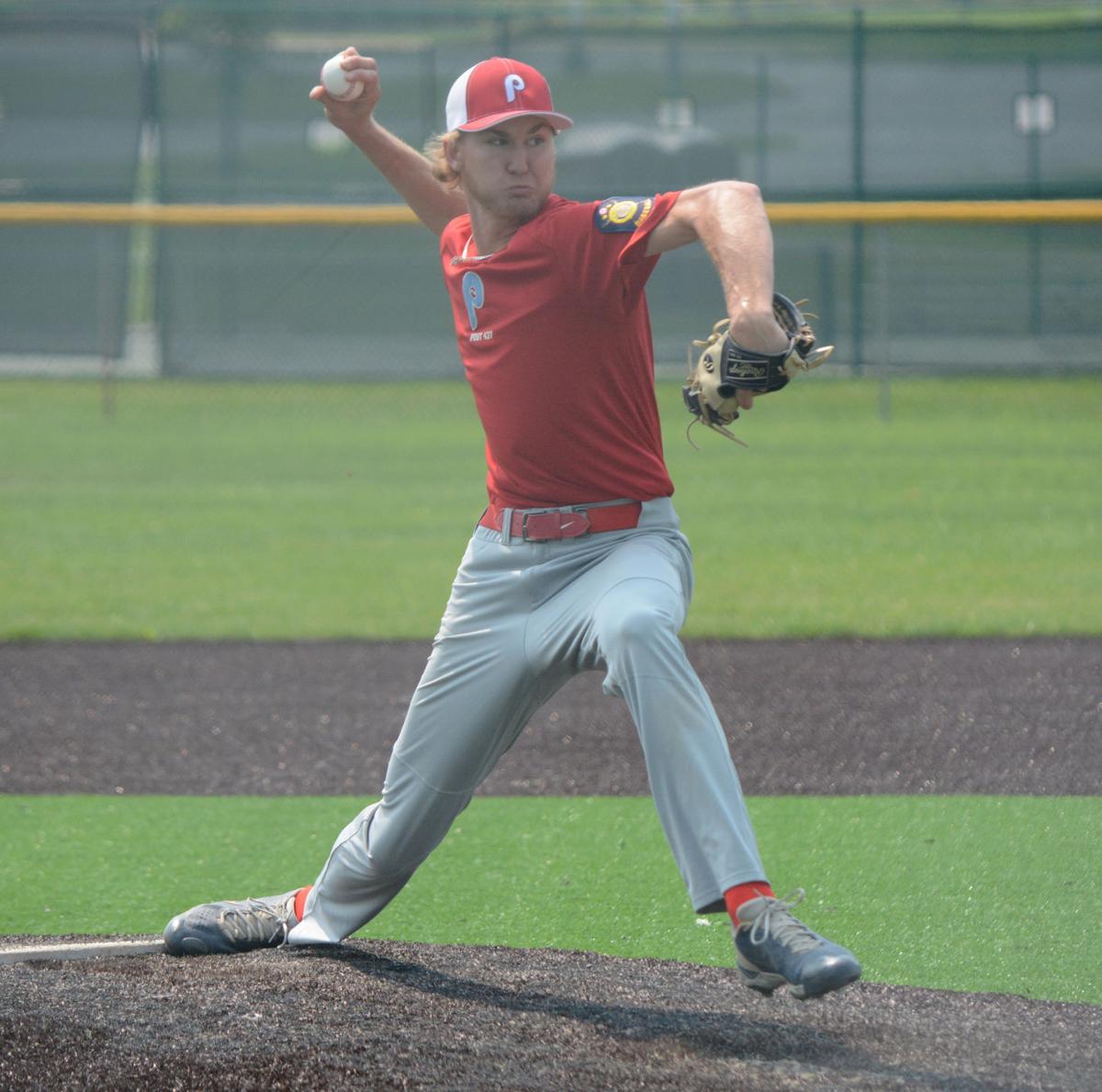 Philipsburg’s Ryan Whitehead pitches in the first inning of Tuesday’s Region 7 Tournament semifinal against Claysburg. Whitehead allowed just one run on four hits, while striking out nine in six innings of work, but the Phils fell to Claysburg 2-1 in eight innings. 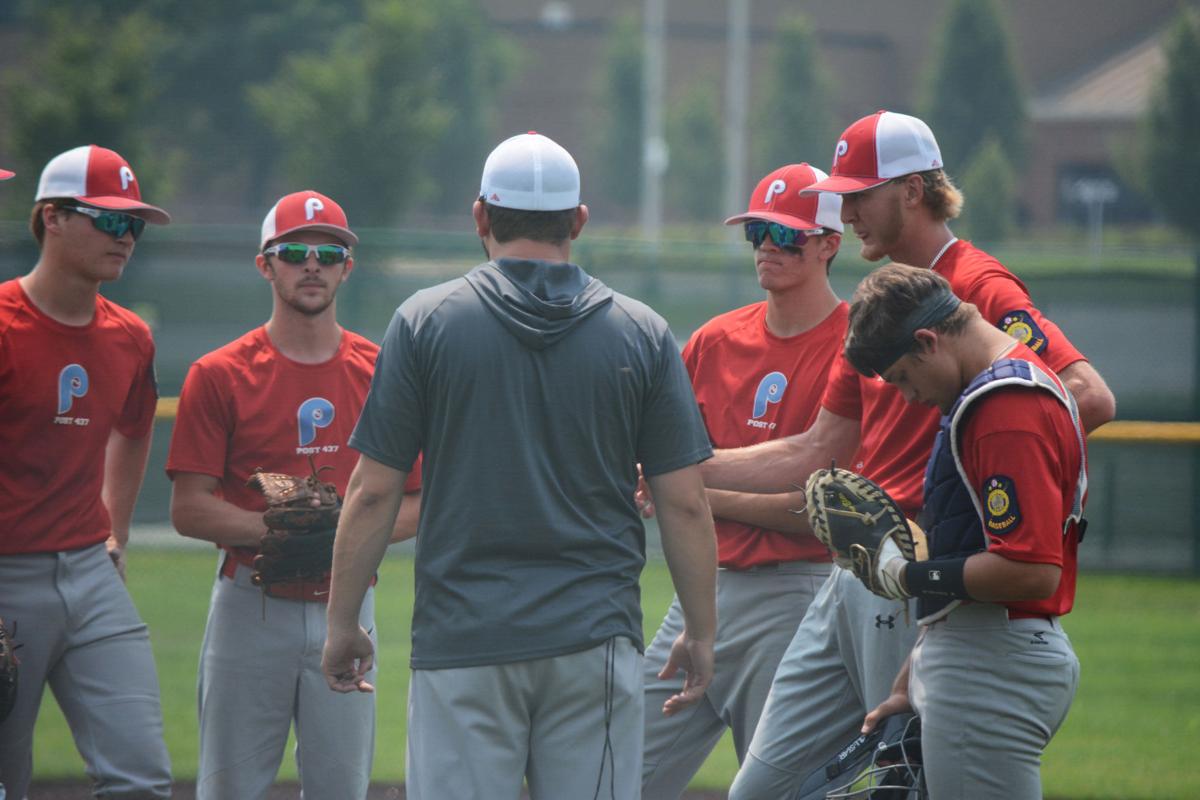 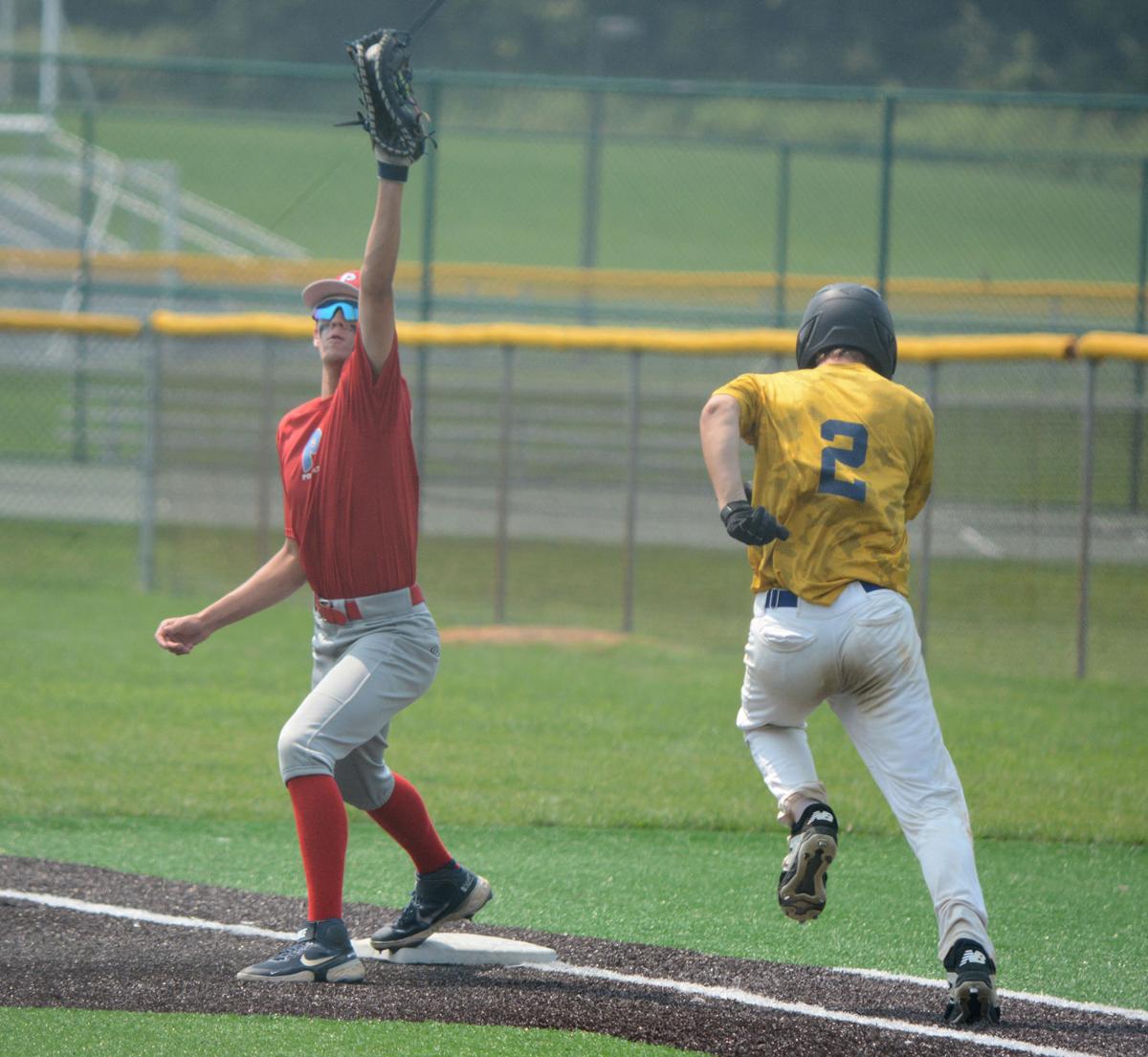 Philipsburg first baseman Parker White snags a high throw as Claysburg’s Ben Dombrowsky runs to the bag during the first inning of Tuesday’s game. White had two of the Phils’ four hits in a 2-1 loss.

Philipsburg’s Ryan Whitehead pitches in the first inning of Tuesday’s Region 7 Tournament semifinal against Claysburg. Whitehead allowed just one run on four hits, while striking out nine in six innings of work, but the Phils fell to Claysburg 2-1 in eight innings.

Philipsburg first baseman Parker White snags a high throw as Claysburg’s Ben Dombrowsky runs to the bag during the first inning of Tuesday’s game. White had two of the Phils’ four hits in a 2-1 loss.

SIDMAN — Philipsburg’s Nick Coudriet led off Tuesday’s American Legion Baseball Region 7 semifinal against Claysburg with a single and scored later in the inning on a Corey Chamberlain wild pitch.

Unfortunately for the Phils, that was the last bad pitch Chamberlain made all game long.

Chamberlain went the distance, outdueling Philipsburg ace Ryan Whitehead, and scored the game-winning run in the bottom of the eighth to lead Claysburg to a 2-1, extra-inning, victory.

Chamberlain allowed just the one run on four hits, while walking two batters and striking out eight. He didn’t allow a hit after Parker White’s two-out single in the third, retiring 15 of the final 17 batters he faced. The other two drew walks.

“The story of the day was (Chamberlain) keeping us to one run,” Philipsburg head coach Brandon Myers said. “He did an incredible job keeping us off-balance. And balls we hit hard, he got us to hit into the ground right at people. He pitched well.”

Whitehead did all he could to match Chamberlain, pitching six innings and giving up one run on four hits, while walking three batters and fanning nine.

But Claysburg was able to get Whitehead’s pitch count up, taking him to a full count on eight occasions. Whitehead won the battle in seven of those encounters, five times via strikeout, but he reached his pitch limit on the last batter of the sixth inning.

“I thought Ryan was equally as great,” Myers said. “Some calls didn’t go his way. But when your offense only scores one run, that’s more important than those calls.”

Denny Prestash came on in relief of Whitehead in the seventh and tossed a scoreless inning, only giving up a two-out walk.

But Claysburg got to him in the eighth as Chamberlain led off with a double and moved to third on Caleb Gampe’s single.

Brandon Hahn relieved Prestash, but walked Hunter Emerick to load the bases and then gave up a base hit on the first pitch to Parker Dibert, who ended it.

“Denny came in and did his job and we thought enough of Brandon that he could get us out of that situation, and I’d put him right back in again,” Myers said. “I can’t say enough about our pitching staff this season.”

Coudriet led off the first with a single and White followed with a base hit to right.

After a strikeout, Nathan Gutskey’s groundout moved the runners up and Coudriet put the Phils on top when he raced home on a wild pitch.

Claysburg answered with one in the bottom of the frame.

Landon Palmer hit a two-out single and Chamberlain drew a walk before Gampe flied out to right.

But with two outs, Emerick knocked a single into shallow right to plate Palmer and tie the game at 1-1.

And then the pitchers took over.

“We just didn’t put enough good at bats together,” Myers said. “I think that allowed (Chamberlain) to get some confidence that he probably deserved. He was just a good pitcher.”

Philipsburg ended its season with a record of 15-3.

“To go through our league with only one loss and come down here and play well — we were in four real good baseball games — the way these kids grew through the summer, for the ones that are coming back I’m excited about next season,” Myers said. “And the one that aren’t, I’m real excited to see what they go and do out in the world.”

ADMINISTRATOR'S NOTICE IN THE ESTATE OF JEANNE E.