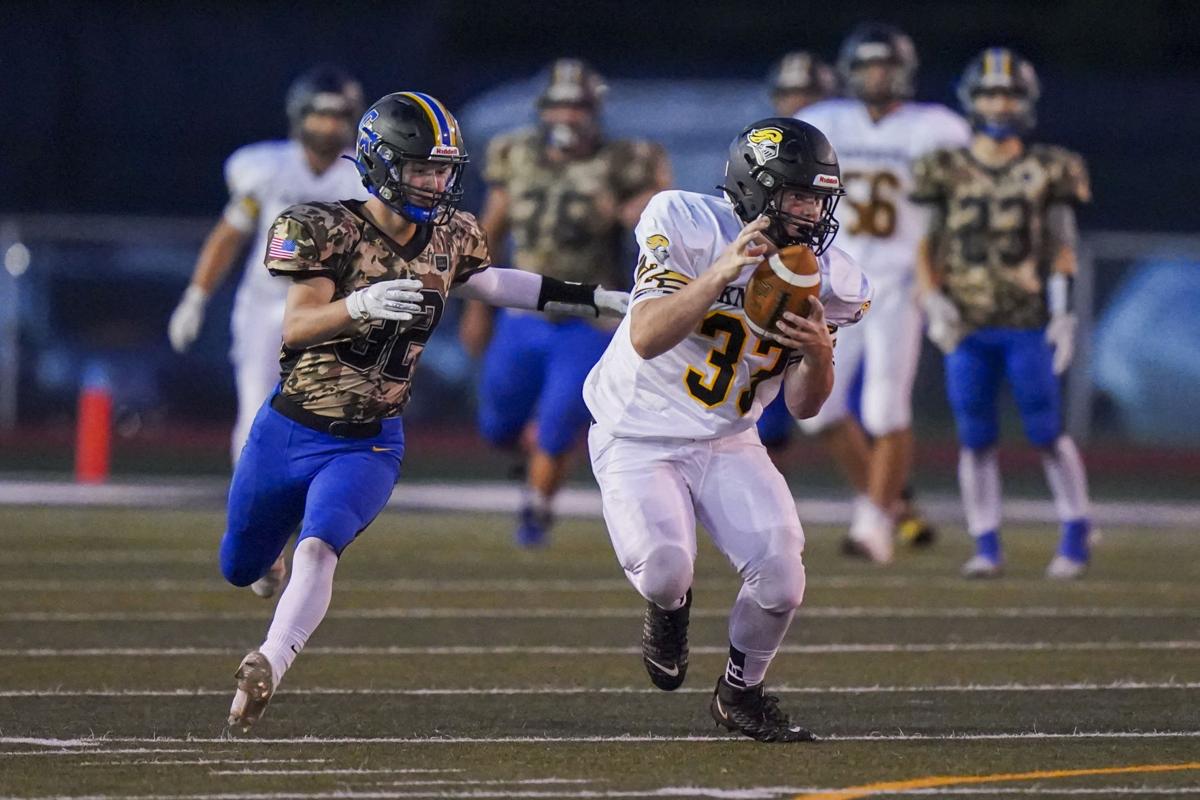 David Honan catches a pass over the middle and turns upfield for extra yardage. 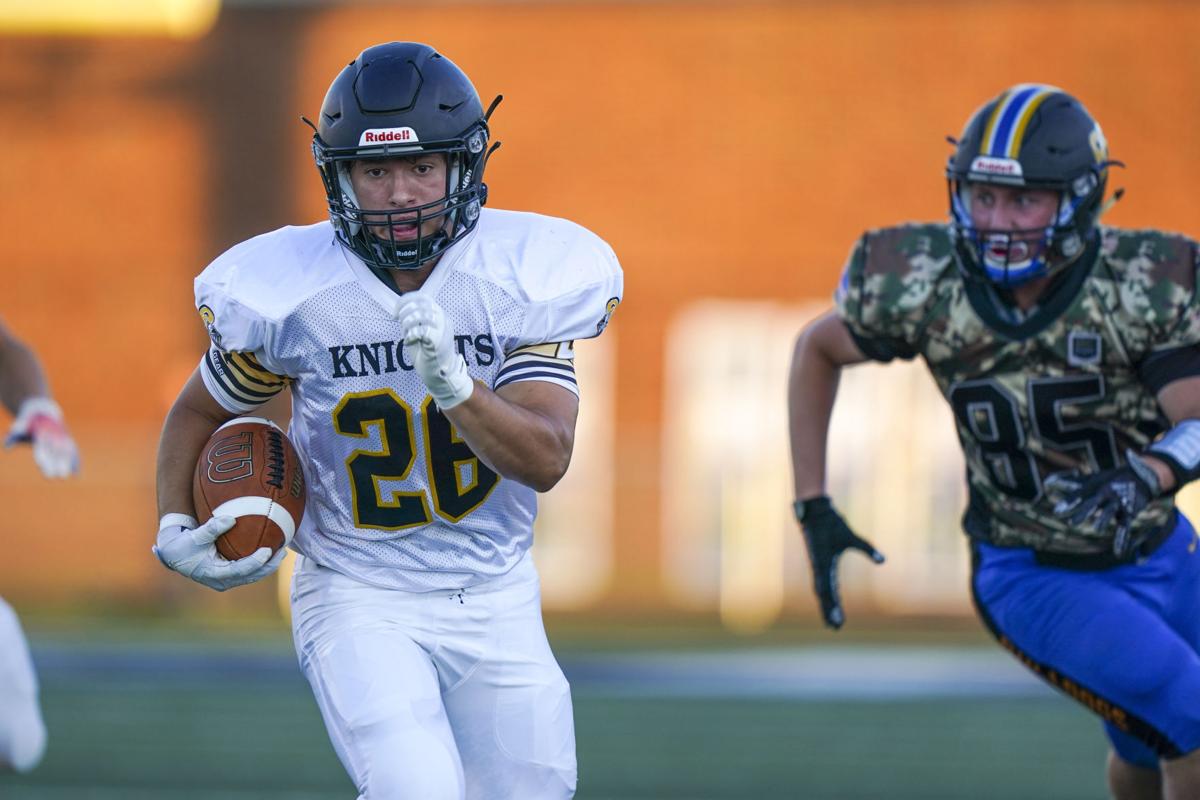 Levi Knuth breaks free for a big gain against Claysburg-Kimmel on Thursday night at Tiger Stadium in Hollidaysburg. 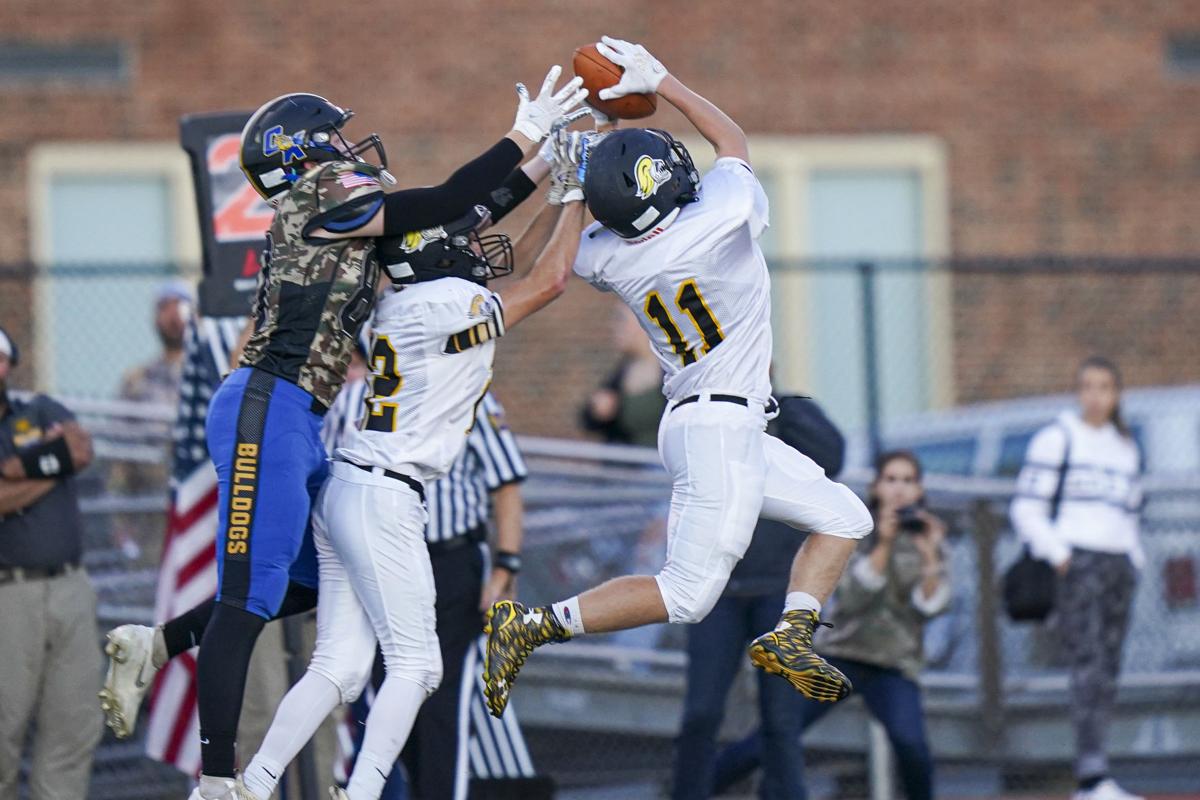 Tanner Kephart leaps to make an interception on Friday night at Tiger Stadium in Hollidaysburg.

David Honan catches a pass over the middle and turns upfield for extra yardage.

Levi Knuth breaks free for a big gain against Claysburg-Kimmel on Thursday night at Tiger Stadium in Hollidaysburg.

Tanner Kephart leaps to make an interception on Friday night at Tiger Stadium in Hollidaysburg.

HOLLIDAYSBURG — Moshannon Valley picked up its first win of the 2021 season and snapped a four-game losing streak in its series against Claysburg-Kimmel with a 28-12 triumph over the Bulldogs Thursday at Tiger Stadium.

Levi Knuth ran for four touchdowns and 209 yards on 22 attempts.

“The line did an amazing job opening up holes tonight,” Knuth said. “I saw it and had 5 yards a carry at least. It was a great night. It’s our first win, but it won’t be our last.”

Knuth’s big night came after a frustrating opening drive in which the Black Knights drove all the way to the Claysburg 2-yard line but went backward from there before turning the ball over on downs.

“We liked the way we started,” Claysburg-Kimmel coach Matt Bilchak said. “We talked about starting strong and finishing strong all week. We got the start, but we didn’t finish.”

The lead didn’t last long. Knuth carried four times for 64 yards and capped off the Knights’ second drive with a 21-yard touchdown run on the first play of the second quarter. Cameron Collins made the extra point to put Moshannon Valley up, 7-6.

“We had so many opportunities in the first half that we didn’t take advantage of,” Moshannon Valley coach Michael Keith said. “Coming back and scoring the touchdown and making the extra point really helped, but it was still a nailbiter at halftime. We told the guys to clean it up, because we felt like we were doing our thing, just making a few mistakes.”

That’s exactly what the Black Knights did.

Knuth scored three more touchdowns in the second half on runs of 8, 17 and 30 yards, and the Moshannon Valley defense allowed just three second-half C-K first downs, two on a late touchdown drive capped by Cole Claycomb’s 50-yard run on a lateral.

“He ran the ball hard. He didn’t go down with one tackler,” Keith said. “When you have a guy playing like that, you don’t stop giving it to him.”

Moshannon Valley stopped a fake punt attempt by Claysburg-Kimmel on the Bulldogs’ 26-yard line late in the third quarter when the Knights were leading just 14-6.

“That was huge,” Keith said. “We didn’t send our punt return team out there thinking they might try it in that situation, and thank goodness we didn’t.”

The Knights finished with 405 total yards to Claysburg’s 233.

“Moshannon Valley has been a tough team we have played the last couple of years,” Bilchak said. “We’ve been able to make the plays at the right time that we needed to, but tonight, they just ran away from us.”

Moshannon Valley and Knuth will host West Branch on Sept. 17.

“When you’re 0-2, you never feel very confident about anything,” Keith said. “But defensively, I felt good. They had one play that we got beat on, so I felt we could stay with them defensively. Offensively, I knew we could move the ball. It was about finishing and punching it in, and we did that in the second half.”

ADMINISTRATOR'S NOTICE IN THE ESTATE OF JEANNE E.