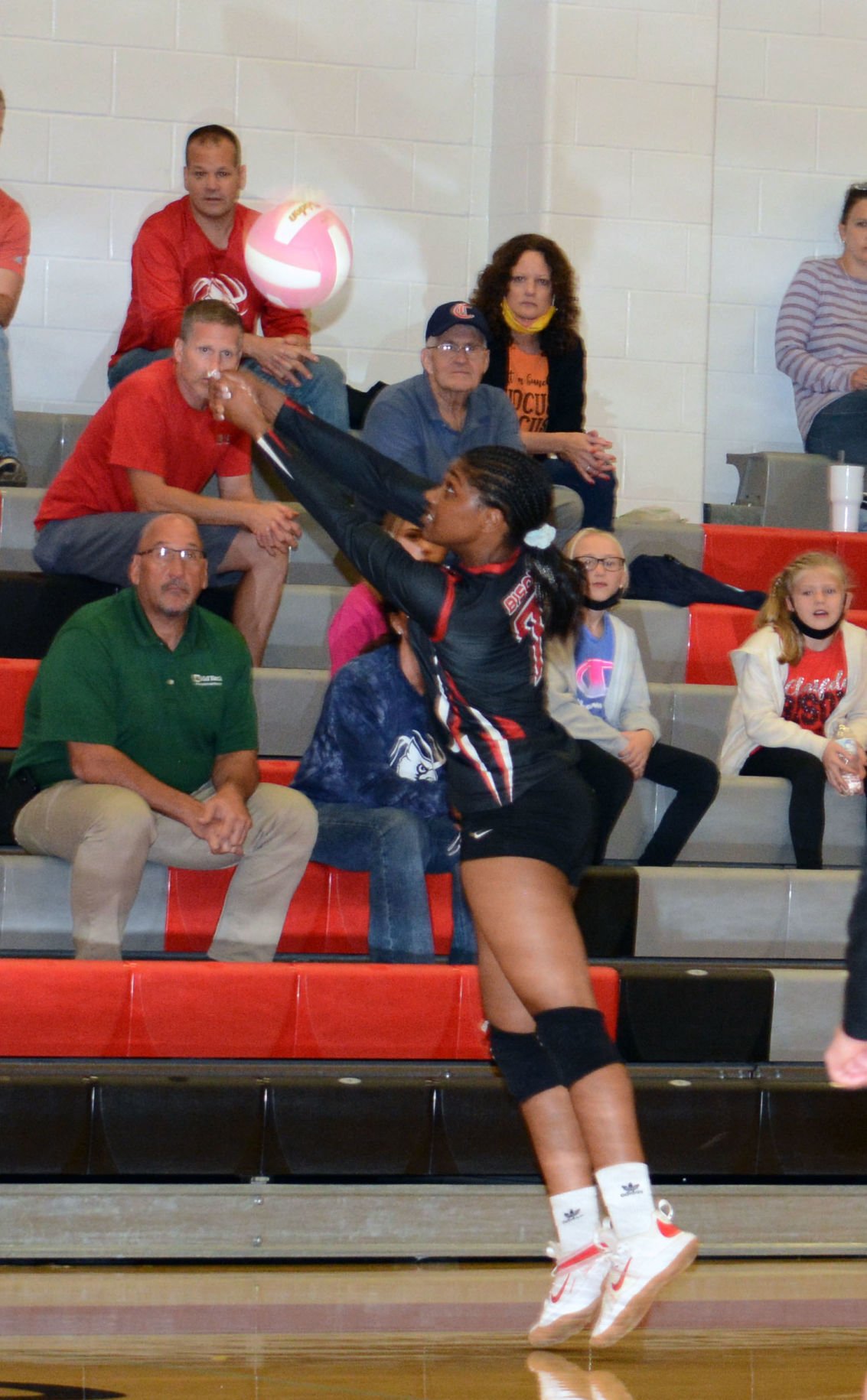 Clearfield’s Kayla Reed saves a ball on Wednesday night against DuBois Central Catholic. The Lady Bison won in a sweep. 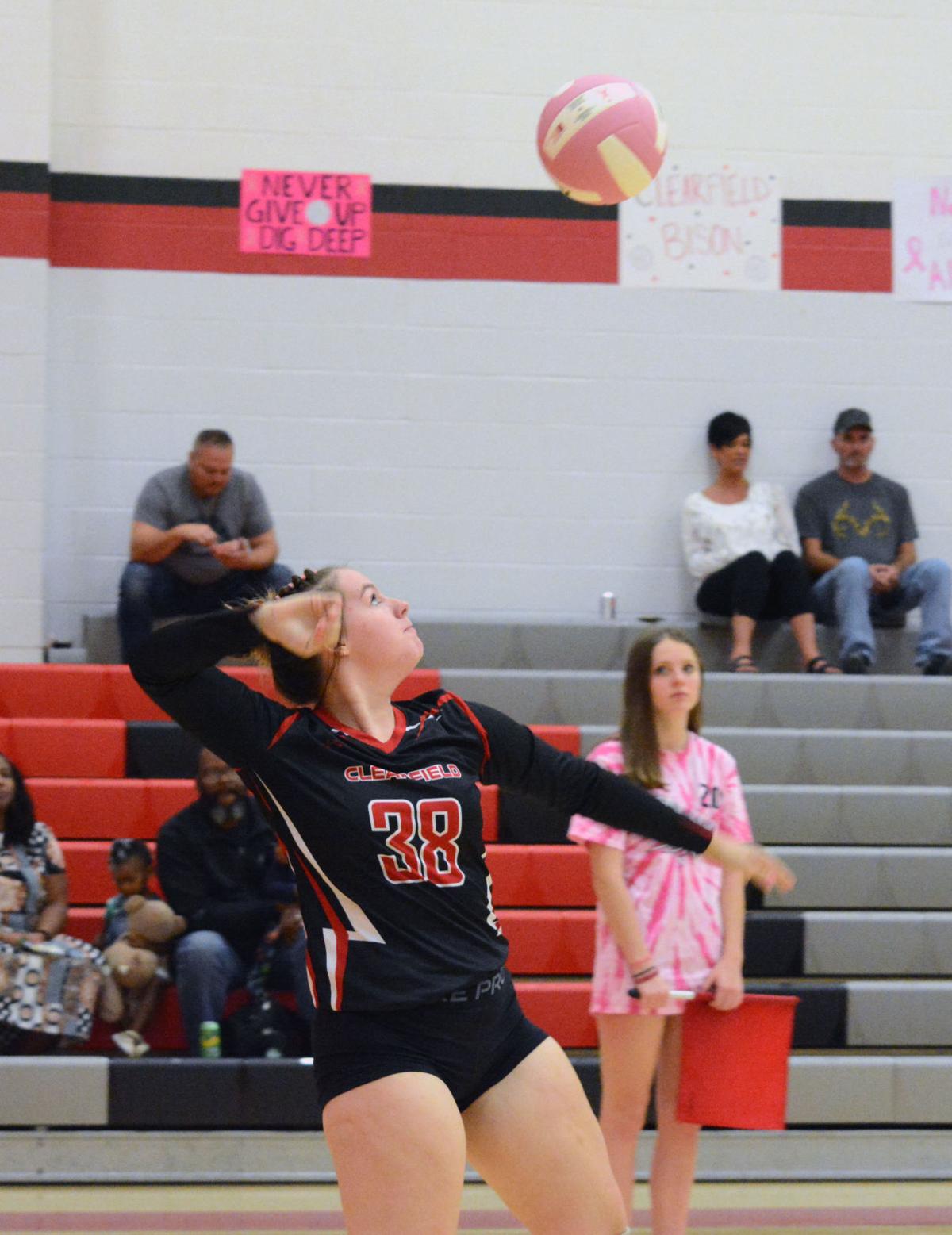 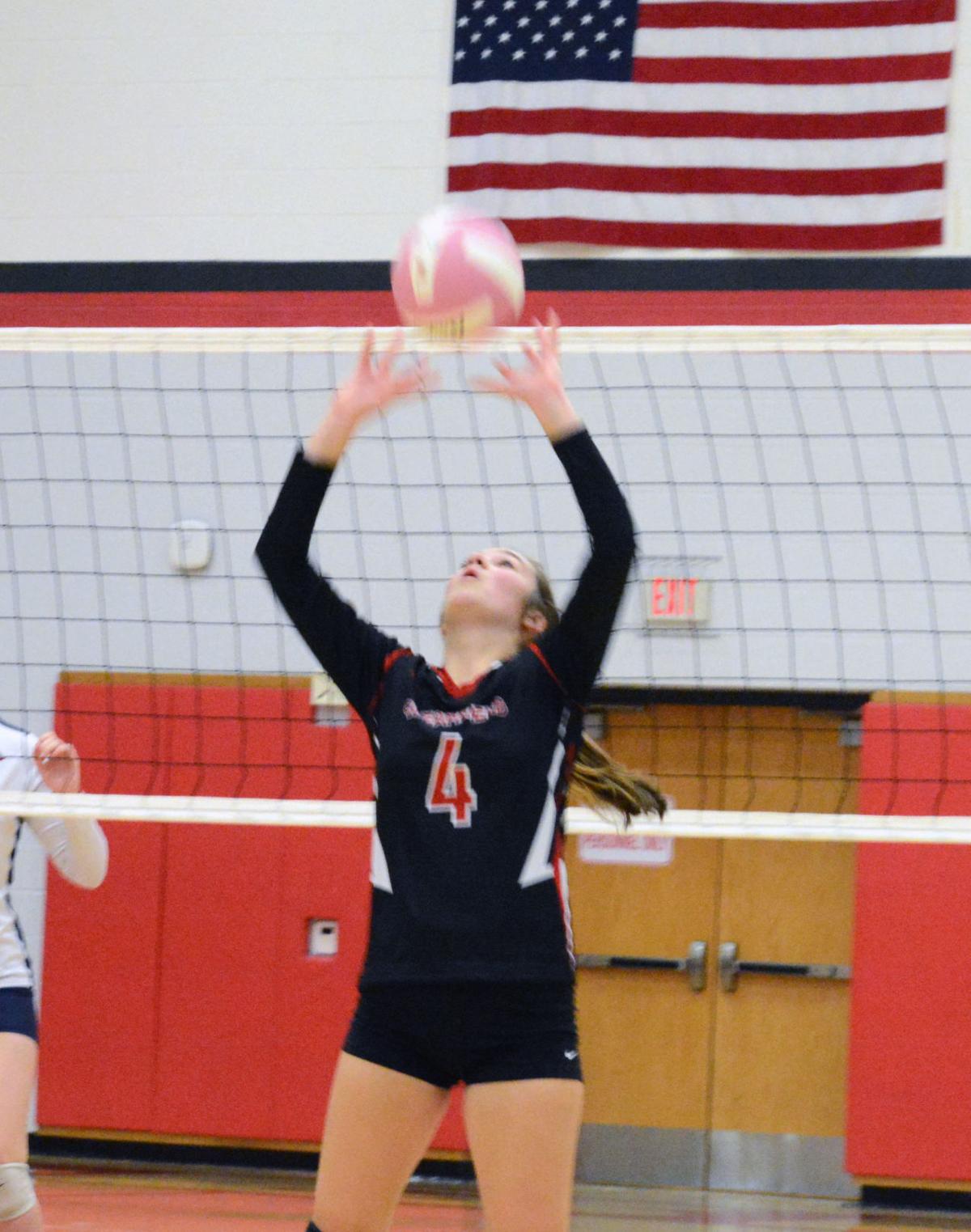 Clearfield’s Hannah Glunt sets to a teammate on Wednesday night against DuBois Central Catholic. Glunt had 14 assists and 14 service points in the three-set victory.

Clearfield’s Kayla Reed saves a ball on Wednesday night against DuBois Central Catholic. The Lady Bison won in a sweep.

Clearfield’s Hannah Glunt sets to a teammate on Wednesday night against DuBois Central Catholic. Glunt had 14 assists and 14 service points in the three-set victory.

HYDE — For years Clearfield volleyball coaches Sandy Bailor and Kelly Kaskan have wanted to see their girls gut out a match and come out on top.

That happened on Wednesday night, as the Lady Bison found themselves trailing visiting DuBois Central Catholic 25-24 late in the second set.

Clearfield’s Sam Campolong came up with a timely kill to tie the match, before Lauren Ressler served up two perfect balls, one which resulted in a kill from Ruby Singleton and another that wasn’t returned to win 27-25.

“That is the first,” said Bailor. “If anybody has been watching Clearfield volleyball over through the last few years, you haven’t seen that. That is one thing Coach (Kaskan) and talk about.

“This team is always battling and never quitting. And that right there was a good omen for us. Then we knew we could do this. We used to quit and that was it.”

The Lady Bison started out quickly against the Lady Cardinals in the first set, getting two big runs at the service line from Ressler and Singleton.

Ressler reeled off five straight points to give Clearfield a 15-12 lead, while Singleton added seven straight, including three aces, to make it 23-13.

Hannah Glunt served up the final point after a sideout, as DCC was called for a carry, setting the final at 25-16.

“I thought Ruby and Addy (Ruiz) played a nice game,” Bailor said. “Our back row of Ressler, Fedder and some of the other girls we are depending on have played well. DuBois Central had some good servers and they gave us a little trouble.

“But I think the girls are starting to learn. I’m really happy with this win. It’s a good win for the girls.”

The Lady Bison traded the lead back and forth several times with the visitors, 18-14 at one point.

With a bunch of confidence heading into the third set, Glunt served up nine points, helped along by two Addy Ruiz kills to give the Lady Bison a 10-2 advantage.

It was pretty much all Clearfield from there, as they went on to win the set 25-15 for the sweep.

“The girls finished it,” Bailor said. “We haven’t been able to really finish one this year with the exception of maybe Brookville. They are getting there.

“It’s a long season and we are in the Mountain League, which is one of the toughest leagues around. We are now competing in it, so that gives us some hope. These are the kind of wins we need.

“Hopefully, we maybe can get the chance to get into the District 9 playoffs.”

Clearfield improved to 3-10 and returns to action at Hollidaysburg today.

ESTATE NOTICE IN THE ESTATE OF DAVID H.