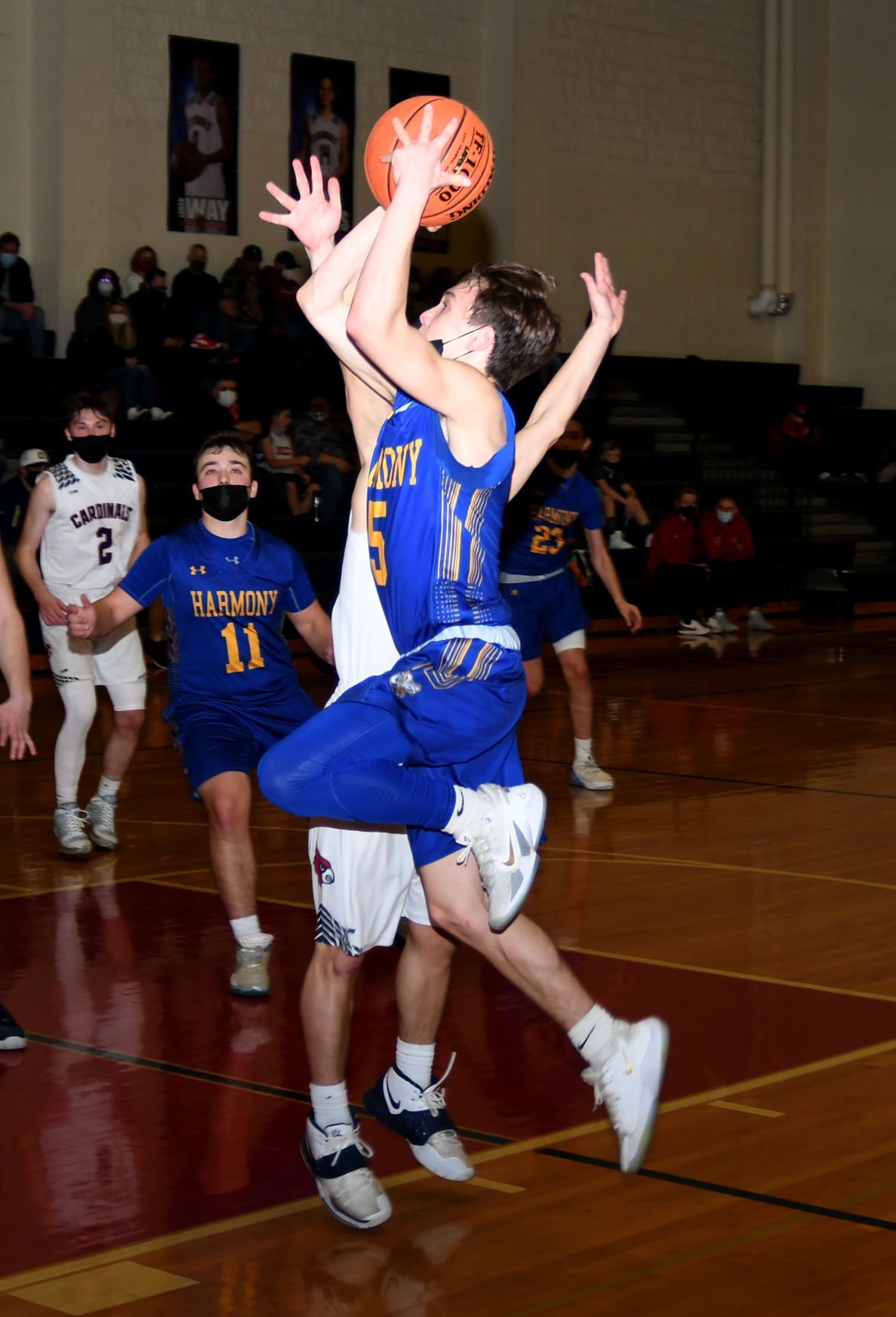 Harmony’s Anthony Maseto (5) drives to the basket Tuesday night at DuBois Central Catholic. Maseto scored five points in a 69-53 loss to the Cardinals. 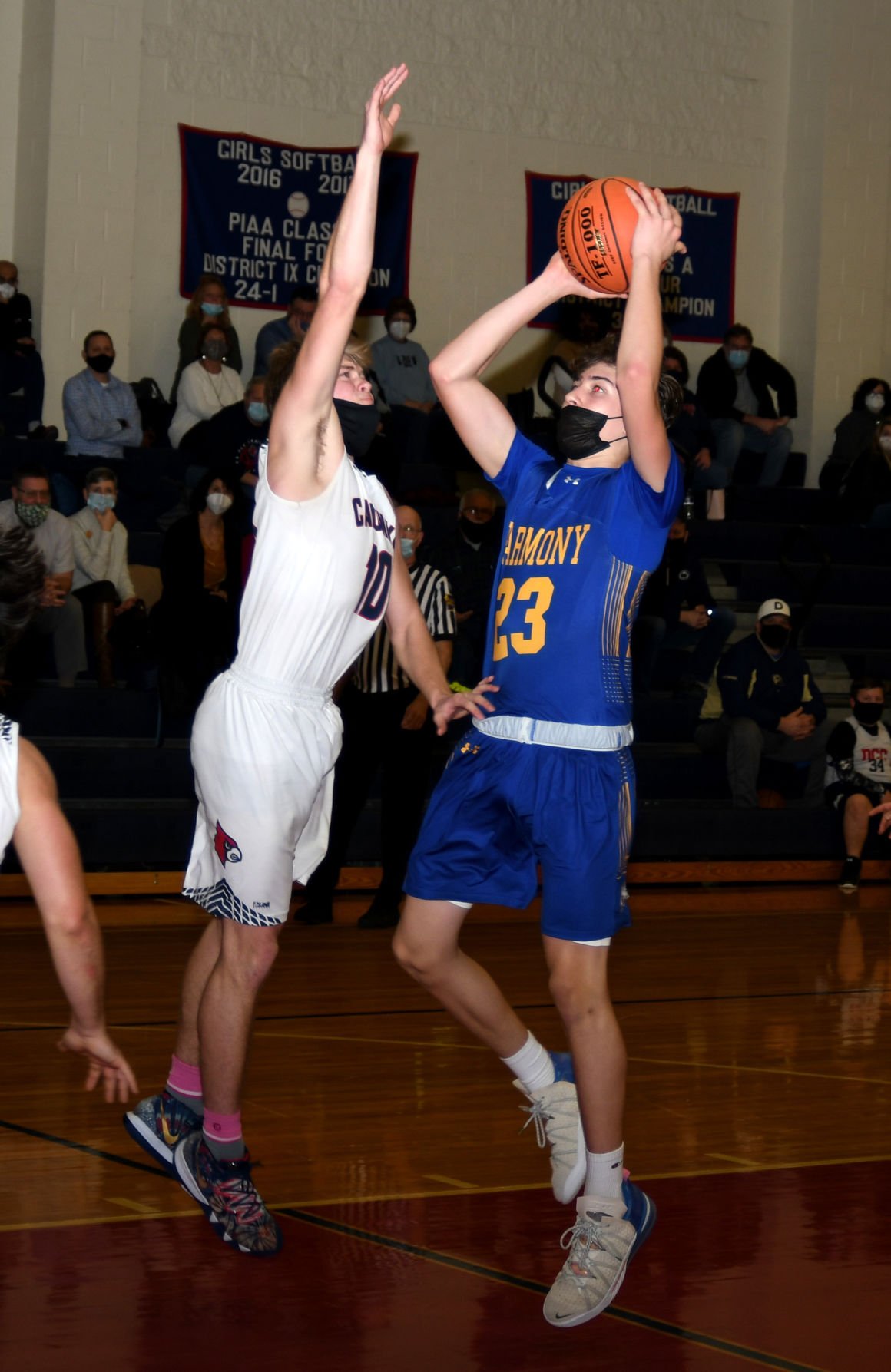 Harmony’s Jack Bracken (23) takes a jumper in the lane over DuBois Central Catholic’s Jalen Kosko (10). Bracken scored 15 points in a 69-53 setback to the Cardinals. 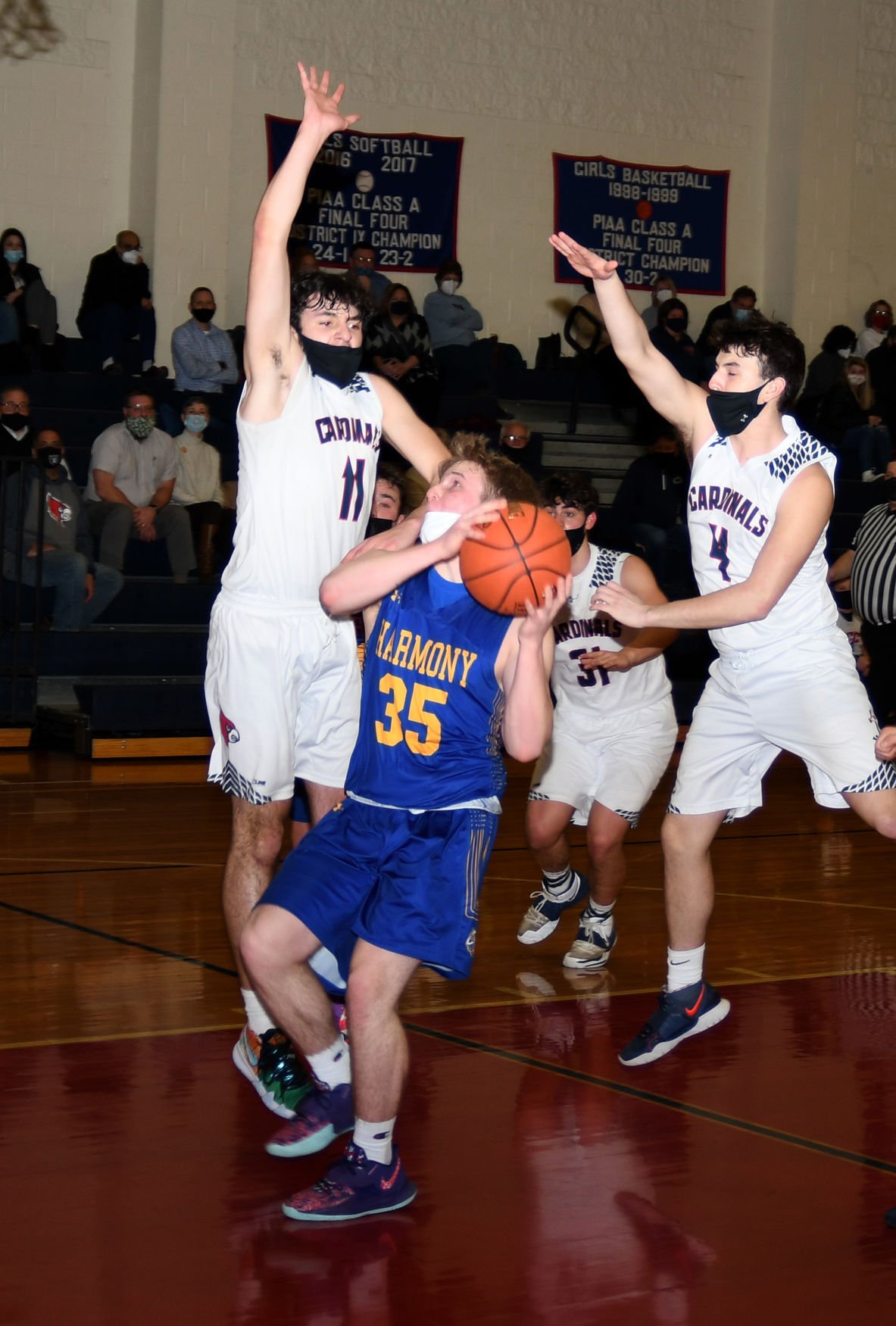 Harmony’s Curtis Boring (35) uses a shot fake to get DuBois Central Catholic’s Alec Srock (11) and Ethan Kness (4) in the air during second-alf action Tuesday. Boring scored 15 points in a 69-53 loss to the Cardinals.

Harmony’s Anthony Maseto (5) drives to the basket Tuesday night at DuBois Central Catholic. Maseto scored five points in a 69-53 loss to the Cardinals.

Harmony’s Jack Bracken (23) takes a jumper in the lane over DuBois Central Catholic’s Jalen Kosko (10). Bracken scored 15 points in a 69-53 setback to the Cardinals.

Harmony’s Curtis Boring (35) uses a shot fake to get DuBois Central Catholic’s Alec Srock (11) and Ethan Kness (4) in the air during second-alf action Tuesday. Boring scored 15 points in a 69-53 loss to the Cardinals.

DuBOIS — Tuesday night’s boys matchup between Harmony and host DuBois Central Catholic turned into the Alec Srock show as the Cardinal junior put together a monster night to help lead DCC past the Owls, 69-53, at the Varischetti Sports Complex.

Srock posted career highs in points (31) and rebounds (14) and added four blocks to go along with his double-double. He was the lone Cardinal to reach double figures, as DCC got a balanced scoring attack beyond Srock’s career night.

Ethan Kness added nine points off the bench, while Jalen Kosko, Dante Armanini and Damon Foster all finished with eight, Foster also came off the bench in the game.

Srock set the tone from the get-go, scoring just seven seconds off the tip on a strong drive to the basket. He never stopped scoring from there, netting 12 first-quarter points to help the Cardinal race out to a 23-7 lead after eight minutes.

That huge first quarter proved to be the difference in the game as DCC (10-6) eventually won by that 16-point margin despite pushing its lead to as many as 25 early in the third quarter.

Harmony (5-7) found its footing after its struggles in the first, as the teams played to a 46-46 draw over the final three quarters. Central’s strong start proved too much for Harmony to overcome though.

Jack Bracken and Curtis Boring each scored 15 points to pace the Owls, who also got eight points from Cohlton Fry.

“I was talking to the kids afterwards about how we tend to look at schools and think we can’t compete,” said Harmony coach Dylan Kurtz. ‘Every game we seem to start with no motivation and wait until the second quarter to start to play. I’ve bene trying to tell them, you need to start that in the first quarter.

“After that first quarter, I couldn’t be happier with how our guys played in the second quarter and in the second half. I give it to the kids though. Going down 16 is tough, and lot of kids want to put their heads down and not play, but they played all four quarters tonight. I couldn’t have asked for more, and they never gave up.”

Fry countered Srock quick score to start the game in the opening minute, but DCC promptly put together a 10-0 run to go 12-2 just before the midway point of the first quarter. Srock had eight of those first 12 points.

Boring ended that run with a 3-pointer, but the Cardinals quickly went on another 9-0 spurt to make it 21-5 late in the quarter before Anthony Maseto scored for the Owls.

Kness closed the first-quarter scoring with a basket with 51 seconds remaining to make it 23-7 after one.

The second quarter quickly turned into a back-and-forth battle as the teams traded scores the entire way as Harmony finally got its offense going. The only team to score back-to-back hoops in the frame was Harmony, which got scores from Fry and Foster Rowles on either side of the midway-point.

Central Catholic got a pair of late 3-pointers from Srock and Foster, with Foster’s trey coming with six seconds on the clock to send to DCC into the locker room up 43-24.

Srock had 10 points in the second, while Foster had five. Fry, Bracken and Boring all had four points in the quarter for Harmony.

In a repeat of the first quarter, DCC came out strong to start the third, getting a pair of hoops by Srock and another by Loren Way to promptly make it a 25-point game at 49-24.

Bracken netted eight of his 15 points in the third for the Owls, while Srock and Kness each had four in the quarter for DCC.

The Cardinals pushed the lead back out to 24 (66-42) in the fourth thanks to Srock’s final five points and three more from Kosko. Harmony closed strong from there, winning the final five minutes 10-3 to get back within 16 points (69-53) at the final buzzer.

EXECUTRIX’S NOTICE IN THE ESTATE OF NORMAN L.