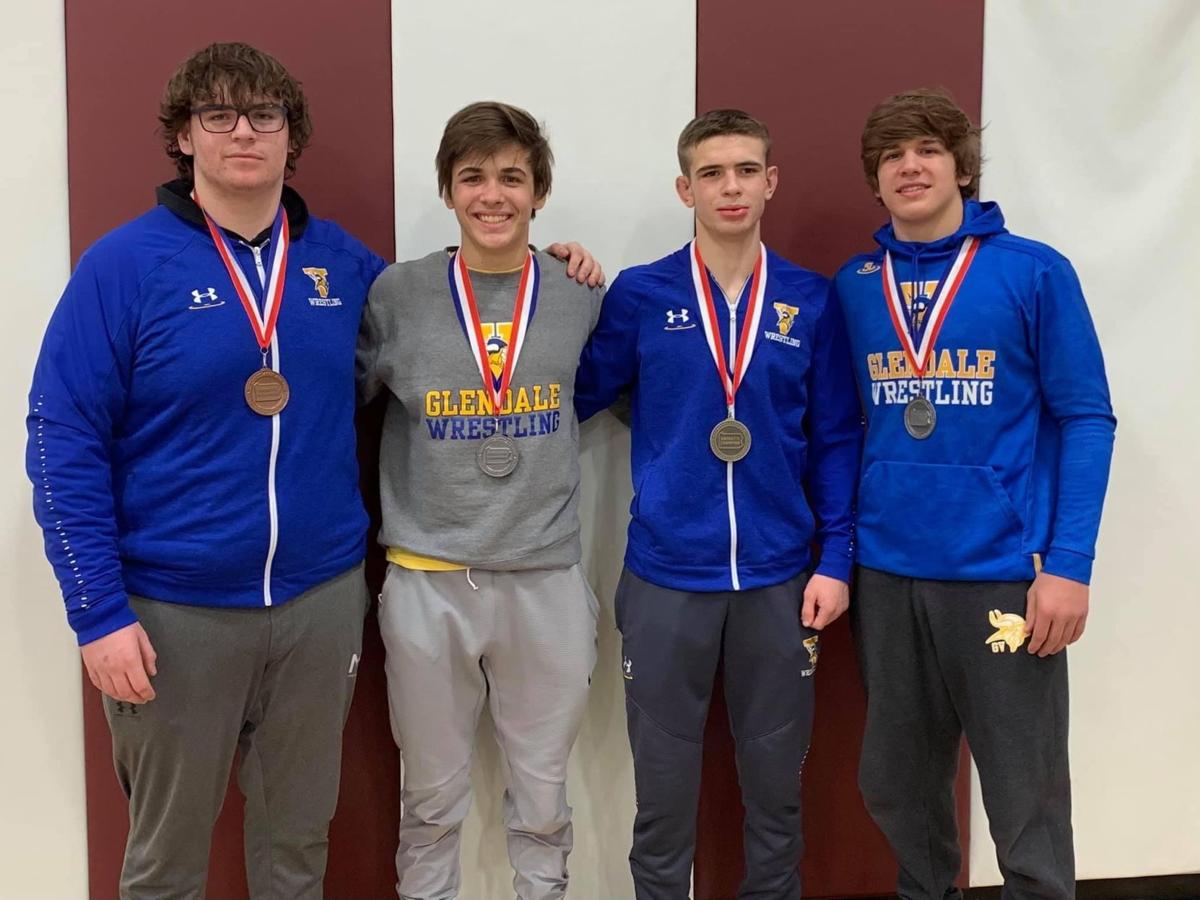 Glendale had four place winners at Saturday’s District Class 2A Tournament. The Vikings placed third overall. From left are Brock Smeal (third at 285), Zeke Dubler (second at 152), Brock McMillen (first at 138) and Suds Dubler (second at 172). 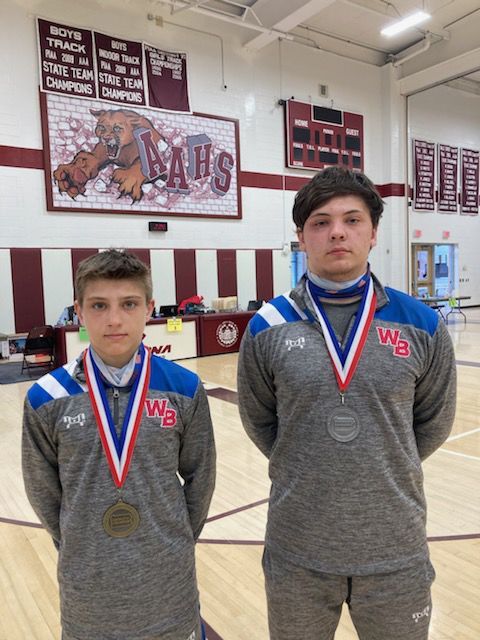 West Branch’s Landon Bainey (first at 106) and Ethan Yingling (second at 215) placed in the Top 3 at Saturday’s District 6 Tournament and qualified for regionals.

Philipsburg-Osceola qualified four wrestlers for the SW Regional Tournament at Saturday’s District 6 tourney. From left are Parker Moore (third at 215), Hunter Weitoish (second at 160), Austin Foster (third at 138) and Marcus Gable (third at 120).

Glendale had four place winners at Saturday’s District Class 2A Tournament. The Vikings placed third overall. From left are Brock Smeal (third at 285), Zeke Dubler (second at 152), Brock McMillen (first at 138) and Suds Dubler (second at 172).

West Branch’s Landon Bainey (first at 106) and Ethan Yingling (second at 215) placed in the Top 3 at Saturday’s District 6 Tournament and qualified for regionals.

Philipsburg-Osceola qualified four wrestlers for the SW Regional Tournament at Saturday’s District 6 tourney. From left are Parker Moore (third at 215), Hunter Weitoish (second at 160), Austin Foster (third at 138) and Marcus Gable (third at 120).

The duo leads a contingent of 10 Progressland wrestlers that placed in the Top 3 and punched their tickets to the Southwest Regional set for Feb. 27 at IUP.

Vikings’ Zeke Dubler (152) and Suds Dubler (172), Warrior Ethan Yingling (215) and Philipsburg-Osceola’s Hunter Weitoish (160) also made their respective finals bouts, but had to settle for second.

McMillen eased into the semifinals when his quarterfinal opponent Noah Teeter (Forest Hills) medically forfeited. McMillen pinned Foster in the semis before meeting up with St. Joseph’s Ammon Ohl in the finals.

Unfortunately for McMillen, he had to battle both Ohl and a bloody nose that stopped the bout three times and had him use a large part of his blood time.

Trailing 1-0 late in the third, McMillen reversed Ohl and was able to get some leverage on him to turn him for three nearfall points. Eventually, McMillen found himself a little out of position and Ohl was able to earn his own reversal with just a few seconds left. But McMillen held on for a 5-3 win and his third district title in four championship appearances.

“I’m really happy for Brock,” Glendale head coach Brian Storm said. “Winning three District 6 titles is a special accomplishment. He works so hard and does all the right things on and off the mat and you want to see him rewarded for that work.

“There was a lot of blood in that match. It was a battle but Brock is a competitor. I wouldn’t doubt if that elevated his game. His compete level is always going to be high no matter what adversity he faces. I actually missed the third period because I left to coach Zeke Dubler on another mat. I looked over and saw him getting back points and knew he was good.”

Bainey was hardly tested in his first two matchups, building a 10-0 lead on Penn Cambria’s Bryce Proudfit before pinning him at 4:35 in the quarters, then recording a 16-1 technical fall over Mount Union’s Mason Bainey in the semis.

It looked like it would be smooth sailing in the finals as well as Bainey opened a 5-0 lead over Bald Eagle Area’s Lucas Fye in the first period before adding a quick takedown early in the second to go up 7-0.

But Fye, who dropped a 10-0 major decision to Bainey in the sectional championship, reversed the Warrior late in the second and got three nearfall points just before the buzzer to cut the deficit to 7-5.

“Landon always wants to score points and tech people or pin people, but at this level your opponent it tough and he just got overaggressive and got put in a situation where he gave up a reversal and got put in a cradle and I think just panicked,” West Branch head coach Jason Bainey said. “It’s not a position he’s used to being in.”

Bainey chose bottom in the third, but couldn’t get out, however Fye was not able to turn him either and the Warrior 106-pounder picked up the win and district title.

“We took down and Lucas was trying to throw a cradle in from all different ways and we finished on the bottom, which is something we’re never happy with,” Coach Bainey said.” But it was a very valuable learning experience and he was still able to win against a very good opponent.”

Both Dubler brothers matched up with tough competition in their finals bouts.

“They wrestled tough as always,” Storm said. “Zeke was right there with Holbay, and I’m sure he gained some confidence in that. Suds had a tough opponent in DuVall but he will bounce back. Both Dubler boys are great at analyzing their matches and knowing what to do to improve. And they have so much wrestling talent that I would not count them out in any match.”

Weitoish also had a battle on his hands in the finals, contending with Forest Hills’ Ryan Weyandt, a 2020 fifth-place finisher at PIAAs. Weitoish, also a state placewinner (8th) last season, scored the first takedown after a scramble with 21 seconds left in the first, but Weyandt reversed at the buzzer to tie things at 2-2.

Weyandt cradled Weitoish for three nearfall point early in the second and added two more back points later to extend the lead. Weitoish tried several ways to turn Weyandt in the third, even getting a one count on one occasion, but was unable to score and had to settle for his second runner-up district finish in a row.

“Something that Hunter should recognize from his match today is that he has the ability to compete against the best kids in the state,” Pataky said. “There are a couple areas of improvement that we can work with him on this coming week to prepare for next weekend.”

Yingling and his finals opponent — Huntingdon’s Briar Deline — both earned all falls on their way to the title bout and it ended with a an early stoppage as well. Unfortunately for Yingling, it was Deline, who was able to hit a headlock and record the pin at 1:26.

“We had a game plan in the finals and Ethan took a great shot, but Deline is a very strong, physical kid and Ethan came up with his head up and got caught in that headlock,” Bainey said. “But he was in the finals and he was excited about that. It’s a match we can win. Ethan is wrestling very well, and so is Briar. We just got caught.”

While Progressland had a tough finals round, going just 2-for-6, the area was perfect in the consey finals.

Gable started things off for Progressland with with a pin of Central’s Jaxon Matthews in the third-place bout, decking the returning PIAA qualifier at 2:59, showing his 42-second quarterfinal fall over the Dragon junior was no fluke.

“Marcus is continuing to develop and has demonstrated his growth throughout the season. For his first trip to the District Championships,” P-O head coach Brad Pataky said, “Marcus wrestled very well. Two things you can always anticipate from Marcus when he steps on the mat are his relentless pace, and consistent focus on scoring points.”

Foster rebounded from his semifinal loss to McMillen with back-to-back falls, pinning Claysburg-Kimmel’s Cole Claycomb in the consey semis before taking care of Teeter in the third-place bout.

“Austin came into this tournament in one of the most dense weight classes, and did so with a positive attitude,” Pataky said. “Austin has continued to develop over the past few years, and is really starting to buy into the process. His progress is something that is an example of putting in the work during spring and summer.”

The returning PIAA sixth-place finisher lost by tech fall to Deline in the quarters, but came back through the conseys with three wins to place third and keep his season going.

Moore pinned Westmont’s Tanner Dluhos, a returning district champ and state qualifier in the first round of conseys before getting to the third-place match on a medical forfeit.

There he scored a 3-0 win over Penn Cambria’s Austin Wagner, who knocked Dluhos into the consolations with a quarterfinal fall.

‘Following his quarterfinal match, Parker was able to find a way to reset and refocus,” Pataky said. “For a lot of wrestlers it can be difficult to find that reset button after losing early in a tournament. We are proud to see him overcome this type of adversity. It’s something that doesn’t happen by luck, but through practice and experience.”

Smeal and his opponent, Huntingdon’s Gunner Singleton, ended up being the last match on the mats.

With all eyes on him, Smeal overcame a 2-0 second-period deficit with an escape, takedown and three back points to take a 6-2 lead to the third where he recorded the fall and became the last of the 39 wrestlers to qualify for regionals.

Smeal was pinned by eventual champ Marvin Beatty (Marion Center) in the semis, but came back with a pin of Westmont’s Noah Gresh just 36 seconds into his consey semi match to set up the third-place bout.

“Brock wrestled great,” Storm said. “I think he’s kind of unknown due to wrestling behind (Kyle) Jasper the past few years, but we’ve always known he has a lot of potential. I’m really happy for him and I could tell he was very happy himself.”