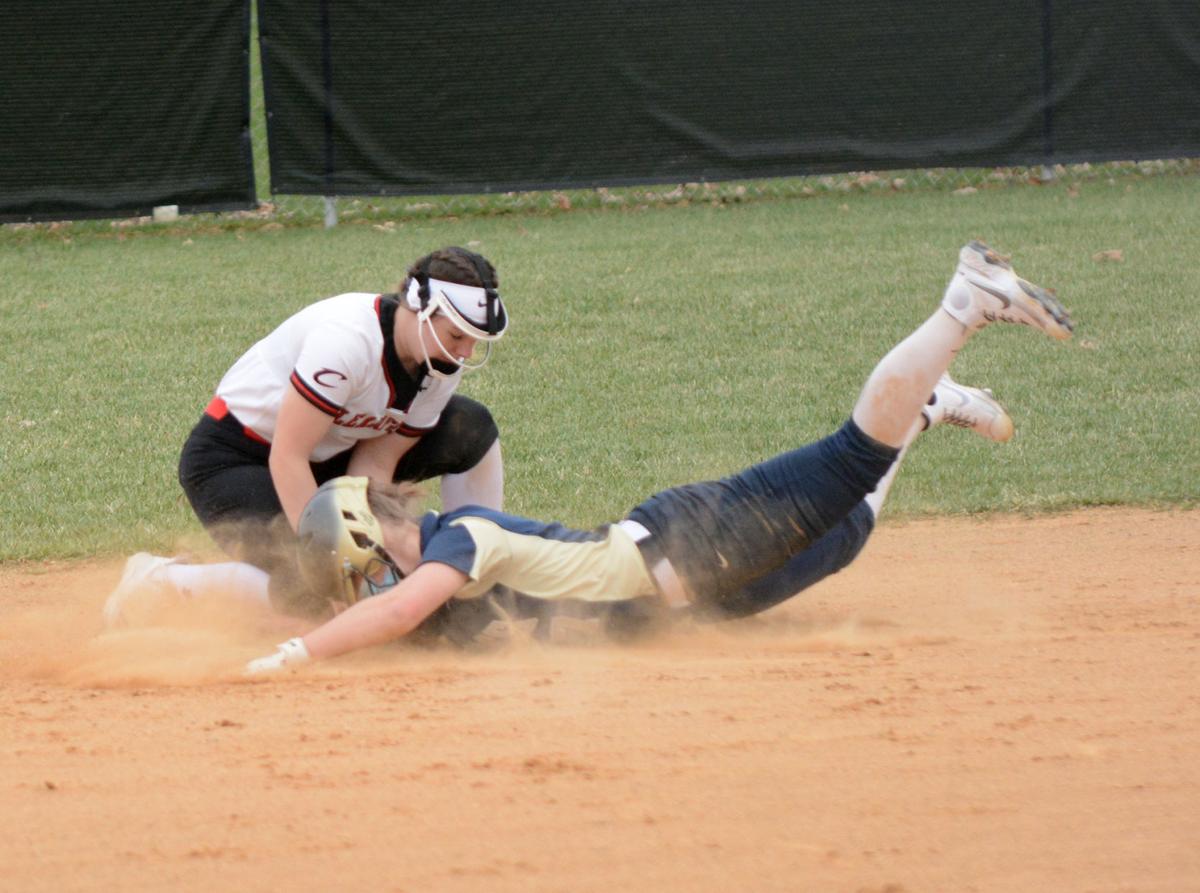 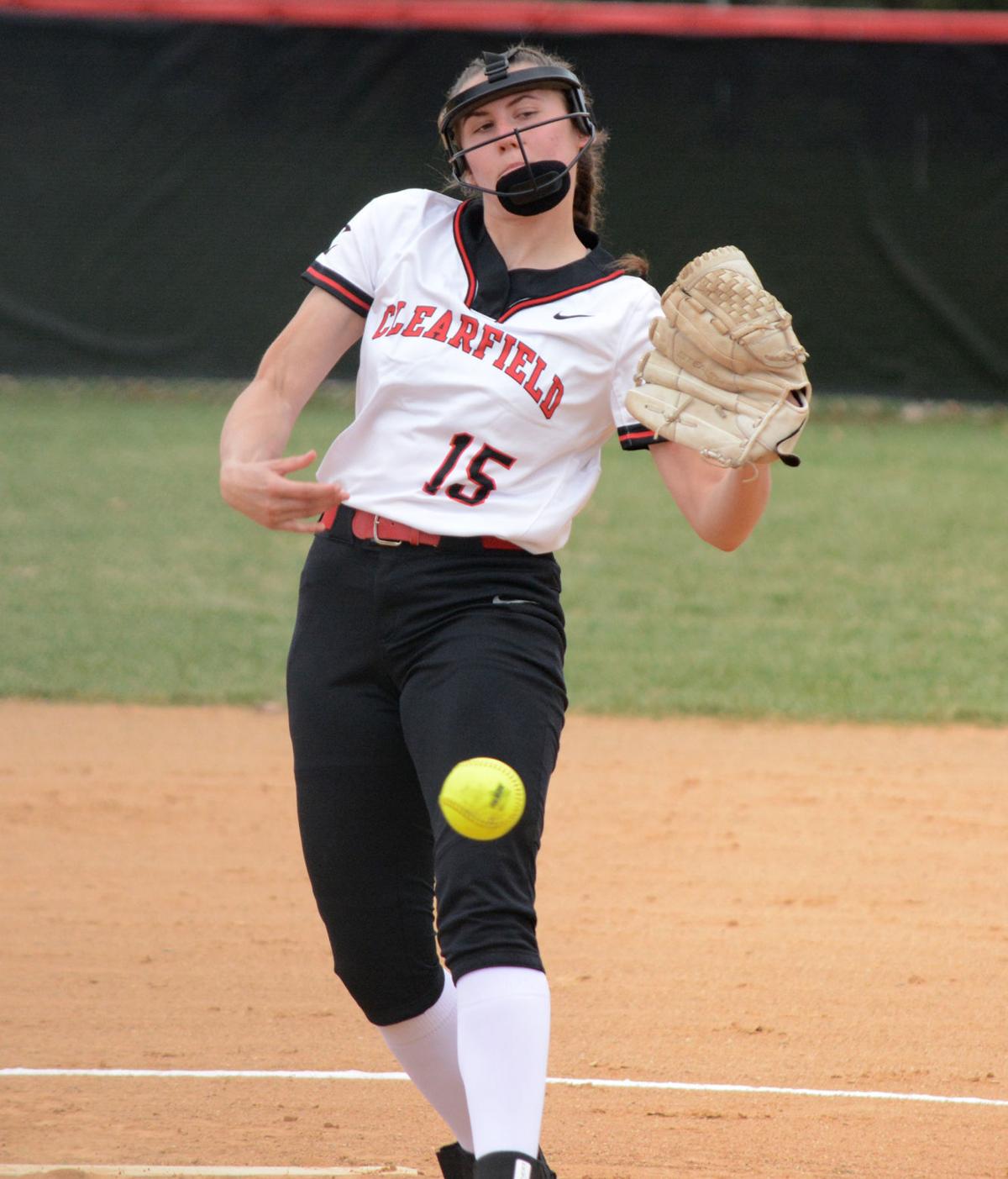 Clearfield’s Emma Hipps fires a pitch to a Bald Eagle Area batter during Monday’s game. Hipps allowed three earned runs on seven hits, while striking out 11 batters in the 6-1 loss. 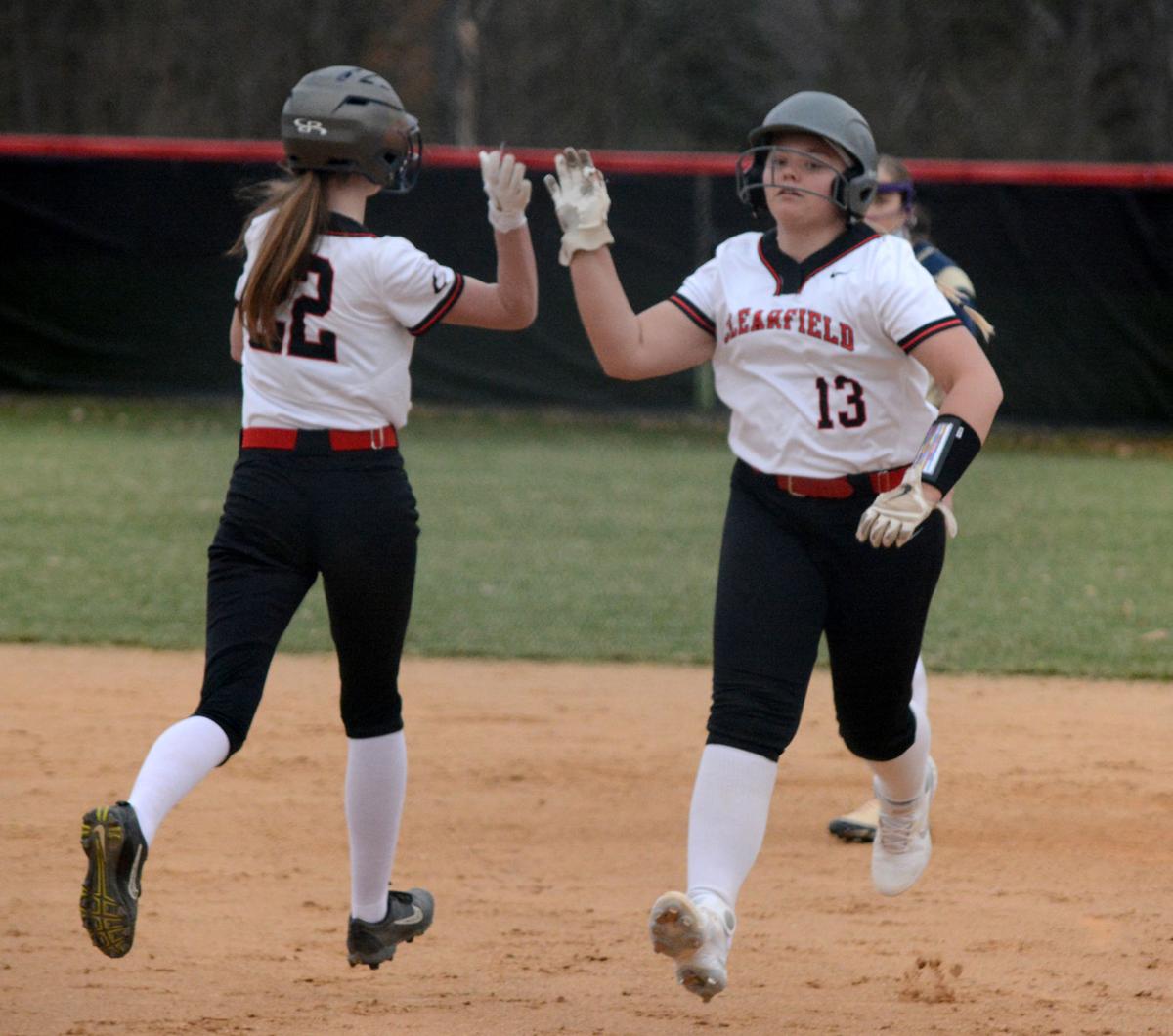 Clearfield’s Olivia Bender (13) comes off the field after hitting a seventh-inning single in Monday’s game. Bender also had a solo home run in the game, but the Lady Bison lost a 6-1 decision to Bald Eagle Area.

Clearfield’s Emma Hipps fires a pitch to a Bald Eagle Area batter during Monday’s game. Hipps allowed three earned runs on seven hits, while striking out 11 batters in the 6-1 loss.

Clearfield’s Olivia Bender (13) comes off the field after hitting a seventh-inning single in Monday’s game. Bender also had a solo home run in the game, but the Lady Bison lost a 6-1 decision to Bald Eagle Area.

The Lady Eagles outhit the hosts 7-3, scored three unearned on three Lady Bison errors and made several heads up baserunning plays that turned into runs.

The Lady Bison jumped on the board first when Olivia Bender took the first pitch she saw from BEA pitcher Maddie Peters and sent it over the right-center field fence to give the hosts a 1-0 lead.

Unfortunately for Clearfield, the Bender home run was the only hit for the hosts until it got back-to-back singles in the seventh inning.

Peters has had the Lady Bison’s number in previous meetings, including the 2019 PIAA class 3A semifinal. Peters struck out 16 in a two-hit shutout in that meeting. On Monday, Clearfield only fanned eight times and did a better job putting the ball in play.

“At the plate, obviously, it wasn’t what we we wanted,” Danver said. “But we did hit better than we have against her in the past. I think she struck us out 16 times in the playoff game (in 2019), so we did a nice job fouling pitches off and getting deep in counts and putting the ball in play. But it still wasn’t where we need to be.”

After Bender gave Clearfield the 1-0 lead, BEA’s Autumn Tobias tied the game with a solo shot off Lady Bison pitcher Emma Hipps to lead off the third.

Lady Eagle No. 9 batter Maddie Eckley drew a one-out walk two batter later, stole second and third and scored on a two-out error to give BEA a lead it never relinquished.

BEA added two runs in both the sixth and seventh to give it some breathing room.

Kaitlyn Smithko smacked a two-run single with two outs in the sixth after BEA loaded the bases with a one-out single from Mara Hockenberry and a pair of two-outs walks, including an intentional free pass to Peters.

Eckley started the seventh-inning rally with an infield single, then moved to third on McKena Baney’s sac bunt. Baney reached on an error.

Hipps struck out the next batter on a pitch in the dirt and when Bender threw to first to complete the out, Eckley raced home from third. The throw back to home was offline and Baney also scored on the play. Hipps allowed three earned runs on seven hits, while walking three batters and striking out 11.

Down 6-1, Clearfield got back-to-back singles from Lauren Ressler and Bender to get a rally going. But Peters was able to wiggle out of the jam and send the Lady Eagles to the 6-1 win.

“I was happy to see that in the seventh inning that the girls were still out there battling,” Danver said. “It shows a lot about the team. I told them before the inning that we were going to find out a lot about this team right now. It could have been really easy to hang their heads and give up, but they battled to the last out.”

Clearfield slipped to 1-1 overall and in the Mountain League.

SEALED PROPOSALS Sealed proposals will be accepted by Gulich Township