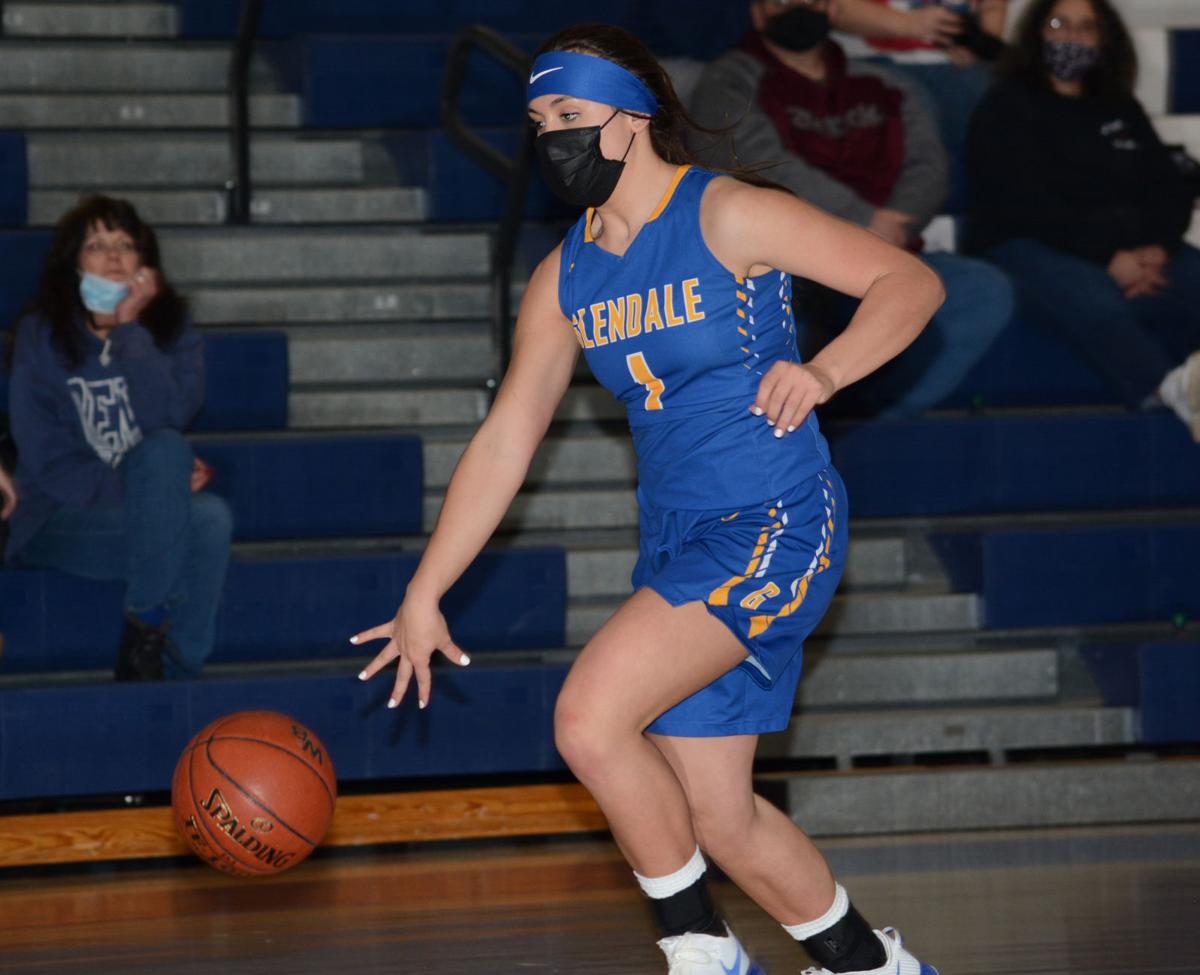 Glendale’s Riley Best goes into score after a steal earlier this season against West Branch. Best had nine points and eight rebounds in the Lady Vikings’ 52-30 victory over Harmony. 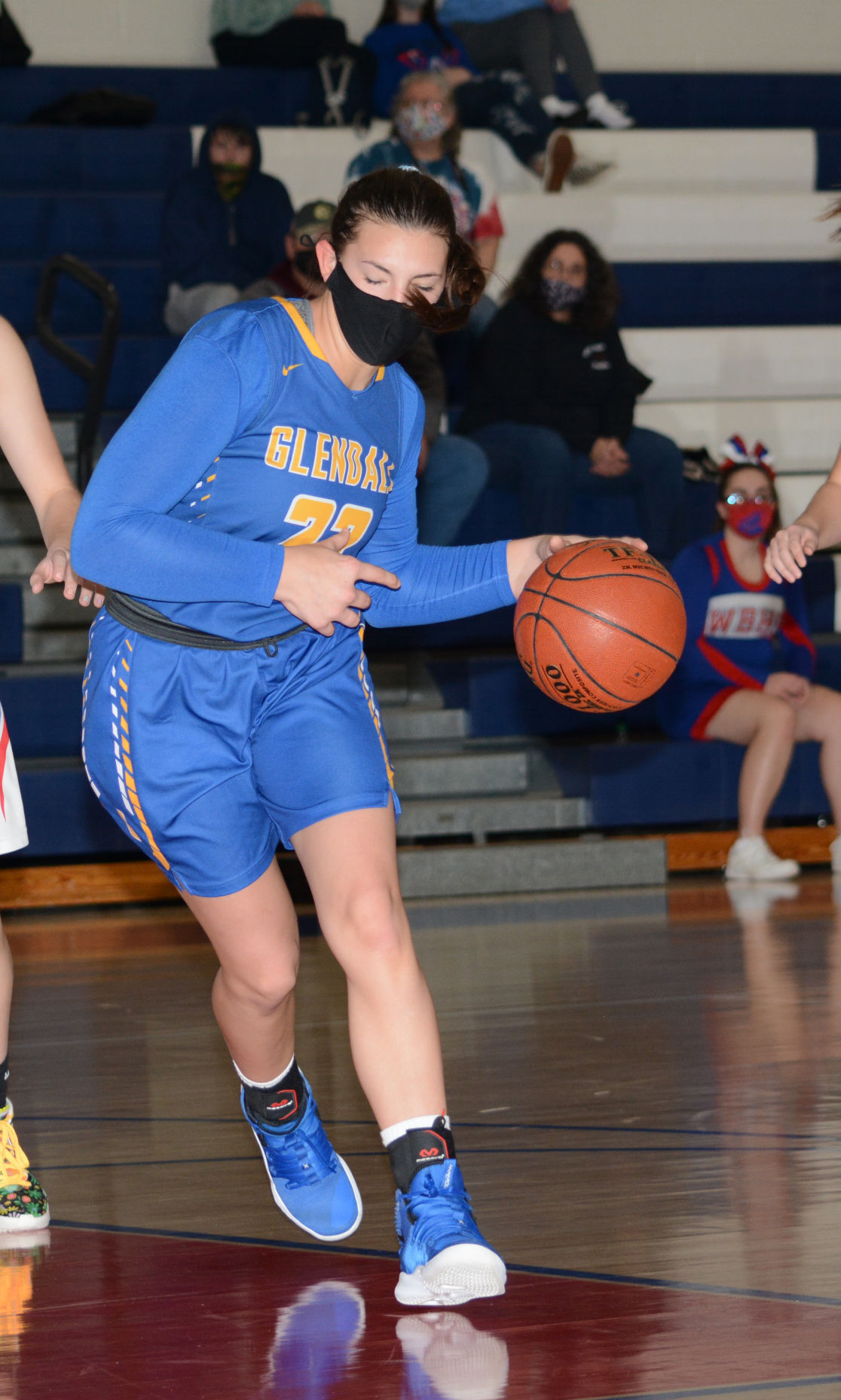 Glendale’s Lilley Vereshack dribbles during a game with West Branch earlier in the year. Vereshack had seven rebounds and five points in the Lady Vikings’ 52-30 victory.

Glendale’s Riley Best goes into score after a steal earlier this season against West Branch. Best had nine points and eight rebounds in the Lady Vikings’ 52-30 victory over Harmony.

Glendale’s Lilley Vereshack dribbles during a game with West Branch earlier in the year. Vereshack had seven rebounds and five points in the Lady Vikings’ 52-30 victory.

The Harmony girls basketball team had eight different players find the basket on Tuesday night against visiting Glendale, but it wasn’t enough as the Lady Vikings took home the 52-30 victory.

The Lady Vikings led 14-7 after the first quarter, thanks to five three-pointers, including two from leading scorer Kyla Campbell.

“Glendale did a great job moving the ball early in the game,” said Harmony head coach Sean McMullen. “I thought we did a nice job moving with them, but they found enough space to hit several 3s and get an early lead on us.

“When we adjusted to their outside shooting, Campbell started to take over the game and was hitting shots from all over the court.”

Campbell finished the night with 25 points, including 15 in the first half.

Glendale continued to widen its lead in the second quarter thanks to its rebounding. The Lady Vikings outrebounded the Lady Owls 42-27 in the game.

“We have not been rebounding well as of late so it was good to see them fight for the boards,” said Glendale head coach Beth Campbell. “It makes it a whole lot easier to win when you don’t give up second-chance points. I thought Alyssa Sinclair and Lilley Vereshack really battled hard for the rebounds tonight.”

Sinclair led the Lady Vikings with nine rebounds, while Campbell and Riley Best had eight rebounds each. Vereshack added seven.

Glendale took a 31-12 lead into halftime, and continued to put pressure on the Lady Owls, going to the press at different times to force turnovers.

Harmony had 20 turnovers on the night, while the Lady Vikings had just seven.

“Going to the press was definitely the difference, we got a lot of steaks and points of off it,” Campbell said.

Harmony did start to find its feet in third quarter, going on a 5-0 run to end the frame.

“Offensively, we didn’t find our rhythm until early in the 3rd quarter,” McMullen said. “We had some trouble with their press early in the game, but we started working the ball around and we were more successful breaking the press throughout the second half.”

Glendale continued to spread around the scoring in the fourth quarter with freshman Caitlyn Rydbom getting her first varsity points.

The Lady Vikings had pretty even scoring after Campbell’s 25 points, with Best netting nine and Casey Kuhn with six. Sinclair and Vereshack each had five points.

“We constantly tell them everyone on this team needs to be willing to shoot,” said Campbell. “Tonight, when they were open they shot. That takes a lot off pressure off Kyla and then helps her shoot better too.

“I think to win the tough games we need to be a team that has five or six girls scoring at least 6 or 8 points a night. We had a lot of girls score tonight.”

“It definitely wasn’t our best night, but the girls played hard the entire game and I am proud of their effort tonight,” McMullen said.

Harmony dropped to 4-7 overall and 3-3 in the Moshannon Valley League. The Lady Owls travel to Philipsburg-Osceola on Thursday.

“Casey Kuhn and Riley Best had really good all around games tonight,” Campbell said. “Then we got some good minutes off the bench from Bree Kuhn, and Cindy and Ariann Richards.

“I was really proud of how hard my freshman played at the end of the game with Caitlin Rydbom getting her first varsity points and Kaprice Cavalet and Aly Buterbaugh playing aggressive.”

Glendale improved to 5-5 overall 4-1 in the MVL. The Lady Vikings travel to Claysburg-Kimmel tonight.