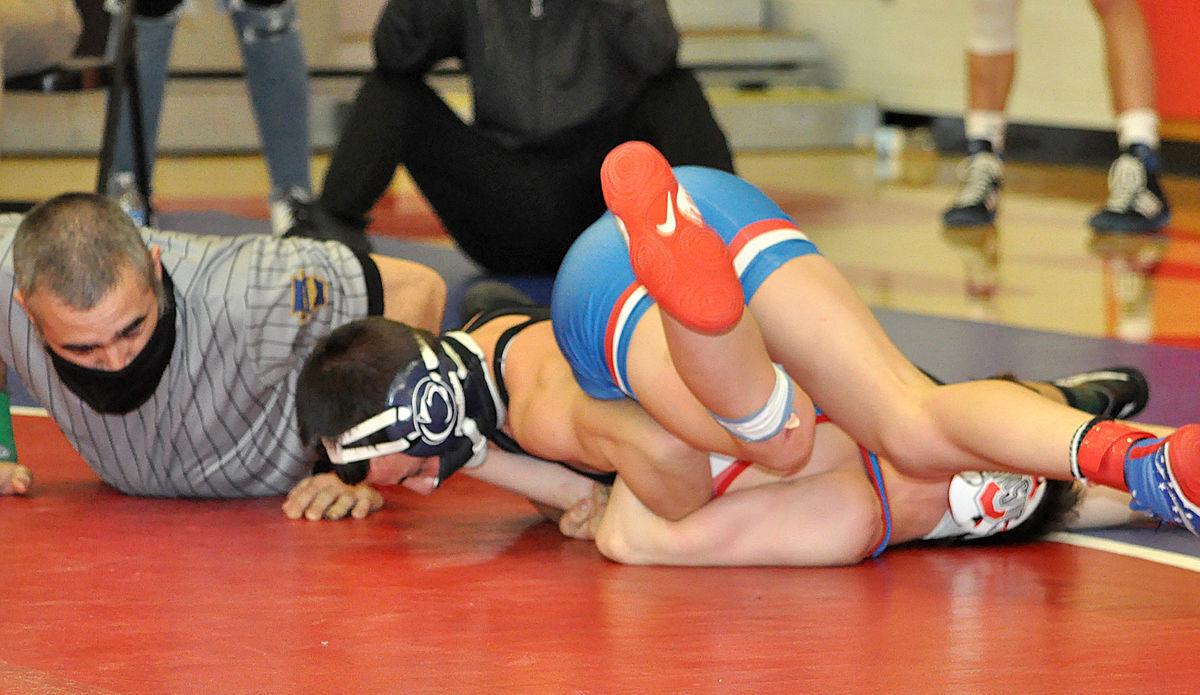 Curwensville’s Jake Carfley gets ready to pin Kane’s Ethan Illerbrun during their 113-pound finals bout. Carfley, the fourth seed, went 3-0 on his way to a district title. 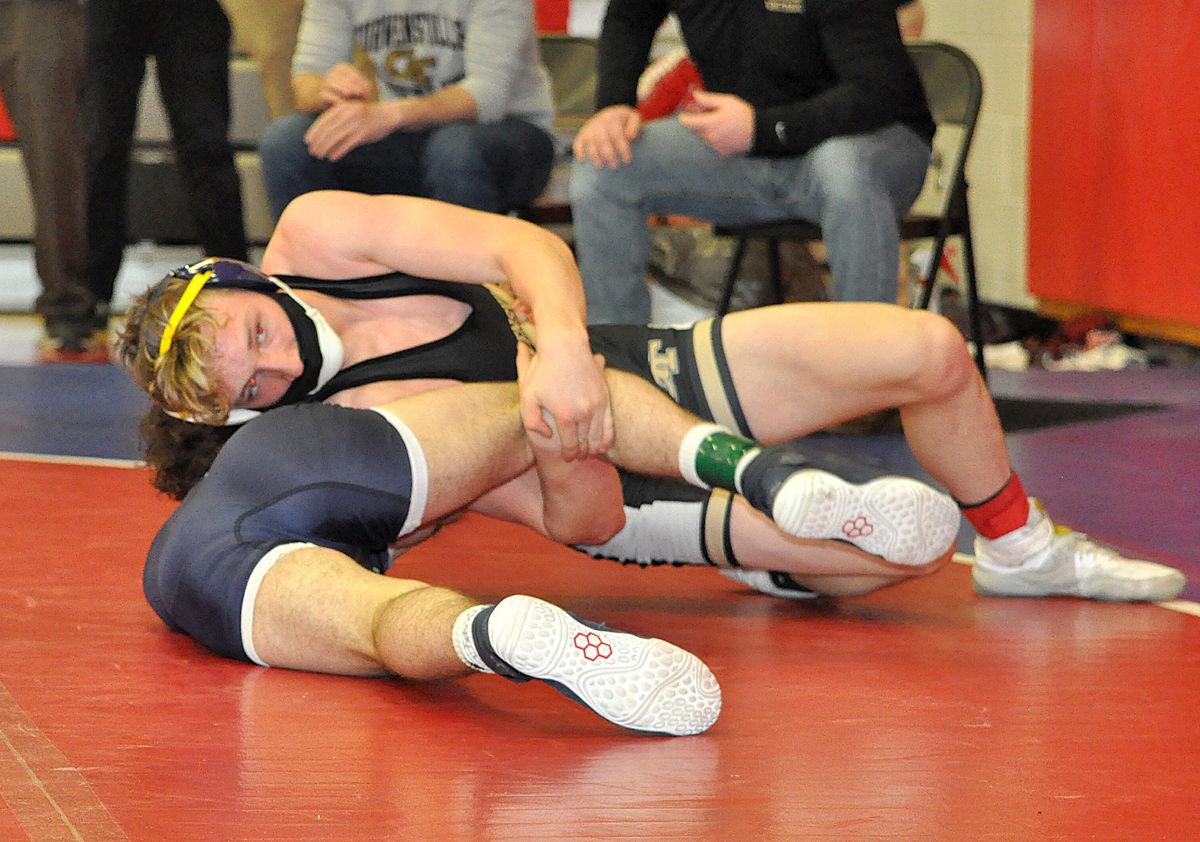 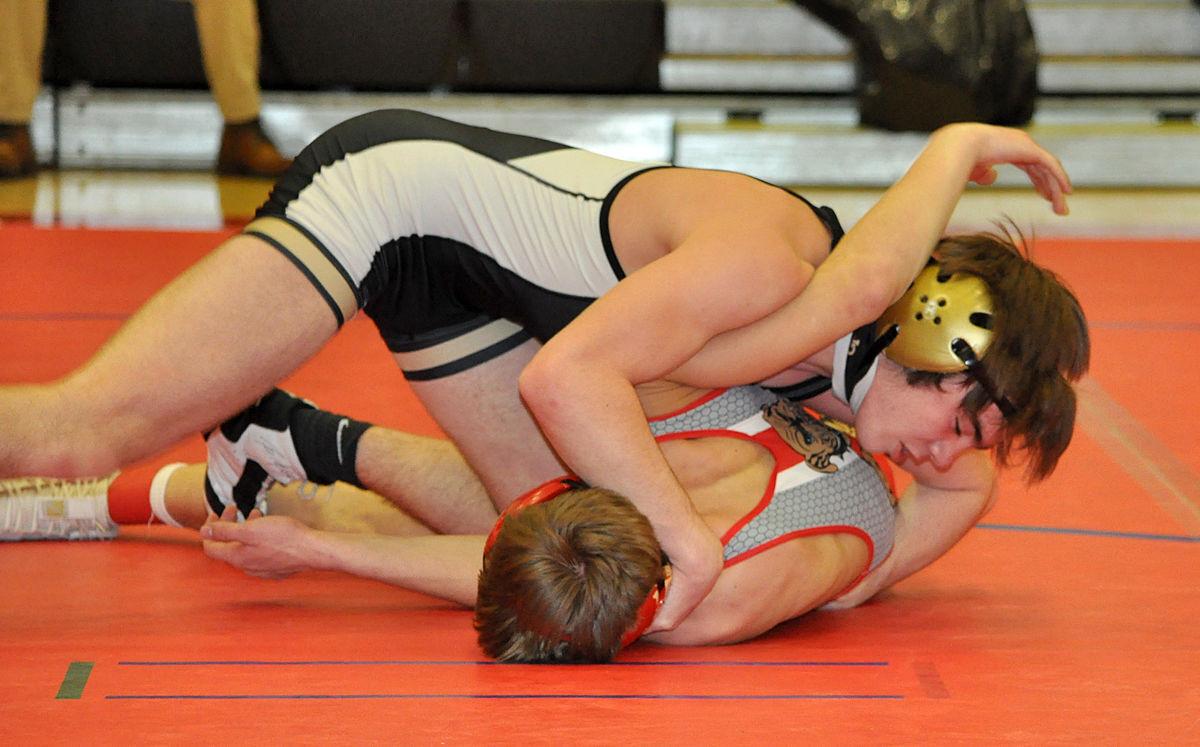 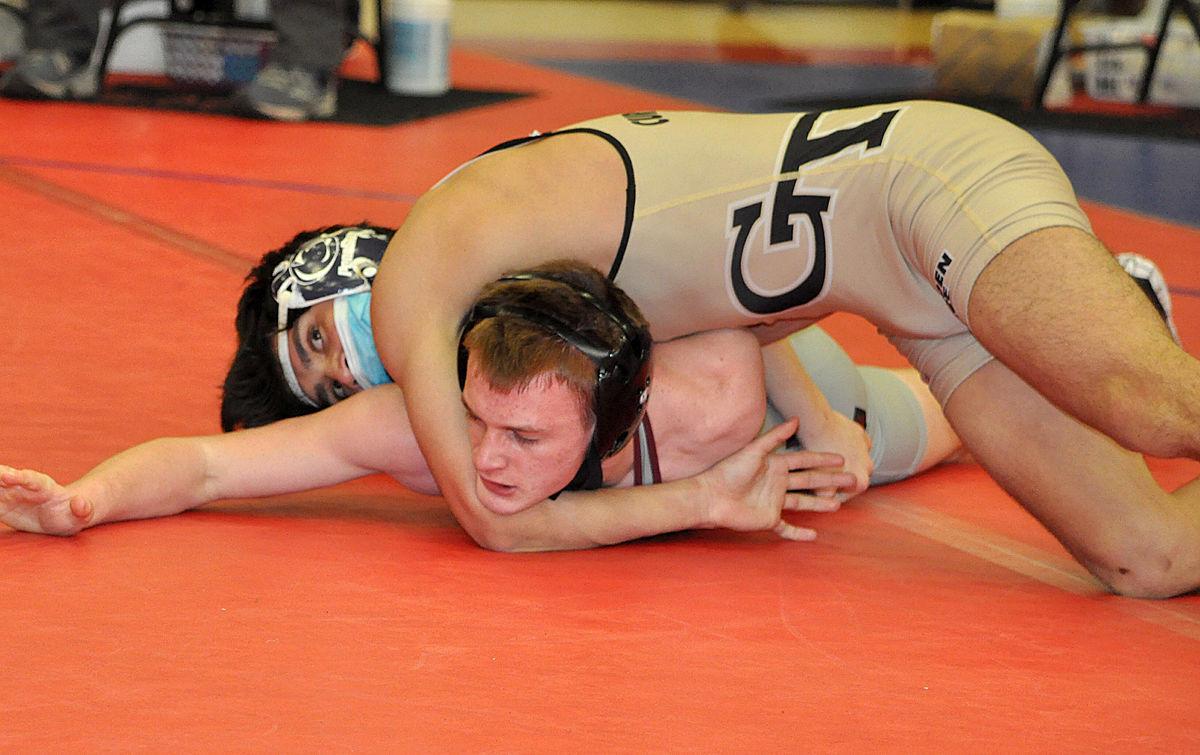 Curwensville's Nik Fegert looks up at the clock as he's riding Cranberry's Anthony Maiure during their 126-pound consolation finals bout. Fegert majored his way to a regional berth with a 13-4 win.

Curwensville’s Jake Carfley gets ready to pin Kane’s Ethan Illerbrun during their 113-pound finals bout. Carfley, the fourth seed, went 3-0 on his way to a district title.

Curwensville's Nik Fegert looks up at the clock as he's riding Cranberry's Anthony Maiure during their 126-pound consolation finals bout. Fegert majored his way to a regional berth with a 13-4 win.

Heading the travel list to Sharon High School for this Saturday is junior Jacob Carfley, who won the 113-pound title as a No. 4 seed. Freshman Ryder Kuklinskie reached the finals at 132 and finished second while sophomore Nik Fegert and freshman Logan Aughenbaugh were third at 126 and 145 pounds.

It took a top-three finish this year to advance in the adjusted postseason setup due to COVID-19 considerations. The regional bracket is just an eight-man setup per weight with five District 10 finishers combining with the top three from District 9.

From Sharon go the top four finishers at each of the 13 weights to the Western Super Regional scheduled for Indiana University of Pa. on March 6.

So it’s off to the next step for the Tide foursome.

“We had six in contention (two lost in consolation finals) and deep down I thought we could have gotten all six of them through from the very beginning,” Tide head coach Dean Swatsworth said. “But they all wrestled tough. Being in and out of the room with COVID, everyone has been there, but this last week we really stepped it up and pushed these kids and their reaction to us, that showed today.

“We watched them do things today that we worked on in the room and I have to give them all the credit in the world because from top bottom, I think the whole team wrestled great, even the kids who didn’t make it. They just wrestled their butts off.”

Carfley went into the postseason with a 5-1 record, three of those wins forfeits, but he notched three solid wins to grab his gold medal. As the No. 4 seed, he blanked Redbank Valley’s No. 5 seed Cole Bish in the quarterfinals, escaping and taking Bish down in the second period, then adding a third-period takedown to set the final.

After losing to Johnsonburg’s top-seeded Wyatt Shaffer three times last year when he finished fourth at 106, Carfley (8-3) turned the tables on the Rams’ previously unbeaten sophomore with a 7-5 overtime win.

Down 4-3 after the first period, then going up 5-4 with a third-period reversal before Shaffer forced extra time with an escape with 30 seconds left, the two went scoreless during the 60-second takedown period. Then trading 30-second riding time periods, Carfley reversed Shaffer in the first segment, then rode out Shaffer in the second to get the big win.

The finals matchup against Kane’s No. 6 seed Ethan Illerbrun, who knocked off No. 2 seed Collin Brown of Sheffield, wasn’t as difficult for Carfley. He built a 4-0 lead with a first-period takedown and second-period reversal before pinning Illerbrun 43 seconds into the period.

Kuklinskie (7-1) finished as he was seeded at 132. The No. 2-seeded freshman opened with a 6-3 decision over Port Allegany’s Dayton Sherwood, then grinded out a 3-2 win over No. 6 seed Brecken Cieleski of Brookville in the semifinals.

Cieleski took Kuklinskie down in the first period and Kuklinskie reversed Cieleski just moments after Cieleski was docked a point for interlocking for the 3-2 edge.

Against top-seeded Trenten Rupp of Redbank Valley in the finals, Kuklinskie was unable to mount any offense against the eventual two-time D9 champion who scored a pair of four-point moves in the first and second periods, then added a third takedown in the third on the way to a 10-1 major decision.

“He’s a freshman, we brought up him this year and I didn’t see him a lot through his junior high years and he kind of surprised me today with how he looked today,” Swatsworth said. “He wrestled great. I knew he could do it, but he wrestled hard and I give him all the credit in the world.”

Fegert (7-3), the sixth seed at 126, went 3-1 in his third-place finish. He decisioned No. 3 seed Collin Porter of Johnsonburg in the quarterfinals before getting majored 11-3 by eventual runner-up and No. 2 seed Mark Palmer of Brockway.

In the consolations, Fegert majored Logan Oakes of Brookville 14-6 and then Anthony Maiure of Clarion 13-4 to earn his regional berth.

“Nick wrestled hard last year and he finished strong,” Swatsworth said. “He finished fifth last year I think and since then he said that he was going to regionals this year. He worked hard for the time that we had and came out today and wrestled hard and physical.”

Aughenbaugh (6-4), also seeded sixth at 145, rallied back to qualify after an opening quarterfinal loss to No. 3 seed Dalton Bish of Redbank Valley. He had Bish on his back at the end of the first period and led 6-2 going into the second before Bish took him down and pinned him.

A pin of Eyan Smith of Cameron County and tight 8-6 overtime win over Kane’s Reece Bechakas got a rematch with Bish in the consolation final where he pinned the Bulldogs senior in the third period with a 2-0 lead.

“Logan just kept his composure,” Swatsworth said. “He had Bish on his back in his first match before getting pinned and he came back through the losers’ bracket and was able to pin Bish in the finals and that was huge.”

Brady was 2-2 at 215. He was pinned by Port Allegany’s Derek Kallenborn in the third-place bout.

Brookville won its second straight team title and ninth in 11 years with 174 points, 20 ahead of runner-up Port Allegany with Redbank Valley (140.5), Johnsonburg (107) and Brockway (98.5) all finishing ahead of the Tide.